Water temperature on the beaches of Marshall Islands

Most popular locations in Marshall Islands over the past week

Conditions of sea water on beaches in Marshall Islands

Now in all beaches in Marshall Islands, the water is very warm and comfortable for swimming.

The water temperature in Marshall Islands tends to decrease, its value has decreased both over the last 10 days and over the month.

Today the warmest water in Marshall Islands is recorded in Loen. Its value in this location is 84°F. And the coldest one is in Ujae, its value 81°F.

For the two most popular locations for swimming in Marshall Islands, the graphs of changes in the average water temperature throughout the year are as follows: 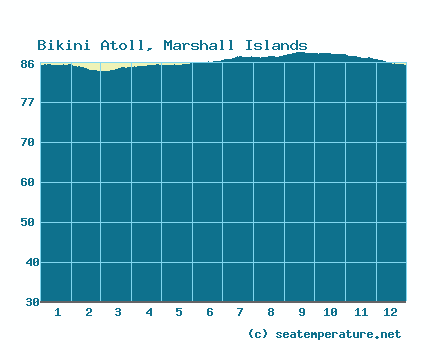 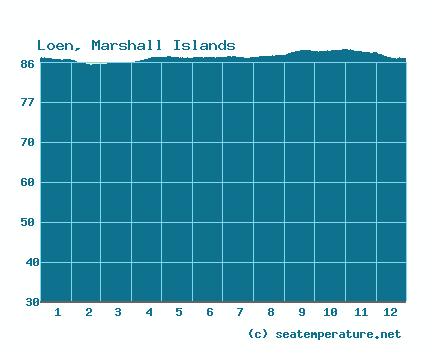 We process, analyze and store data for every beach and city in Marshall Islands. Below is a table with current weather data and trends in some places of the country.

Marshall Islands are located in Australia and Oceania. The country is washed by the Pacific Ocean. Marshall Islands - has a fairly long coastline. To determine the temperature of water on them, we track 23 settlements and resorts.

Tropical trade winds, in the south - subequatorial, marine. The average air temperature stays year-round around the mark of +27 o C, with small “colder» periods (+ 20-24 C) in September - November. From June to August is the hottest time of the year, although in fact the difference between the coolest and the warmest months rarely exceeds an average of 2-3 o C. An interesting feature of the local weather is the night temperature, which, although lower than the daytime temperature, is actually 2 -4 degrees higher than average daily minimum. The reason is simple - nights almost always do without rain, which usually falls in the form of heavy showers in the daytime. The water temperature throughout the year remains in the range + 20-23 oC. Precipitation is about 2000-4000 mm per year. A relatively dry period is recorded from January to March, the wet season falls on May-November. The vast majority of rainfall occurs during daylight hours. Like other Pacific island groups, the weather here is usually very cloudy - for most of the day a thin sheet of layered or thick “wall» of cumulus clouds hangs over the islands. Strong enough, but noticeably lightening the heat trade winds blow over the Marshall Islands almost all year round. Powerful tropical storms and typhoons are quite rare in these parts, because when they originate just in the equatorial latitudes, they simply do not have time to gain their destructive power. However, during the period from March to April or from October to November, quite strong atmospheric fronts and cyclones are observed here.bringing with it a short-term change in weather and sea waves.