Water temperature on the beaches of Malta

Most popular locations in Malta over the past week

Conditions of sea water on beaches in Malta

Now in beaches in Malta, the water temperature is on the line of comfort. There are locations with cool water, there are places with more or less comfortable water.

The water temperature in Malta tends to decrease, its value has decreased both over the last 10 days and over the month.

Today the warmest water in Malta is recorded in Pieta. Its value in this location is 66°F. And the coldest one is in Kalkara, its value 65°F.

For the two most popular locations for swimming in Malta, the graphs of changes in the average water temperature throughout the year are as follows: 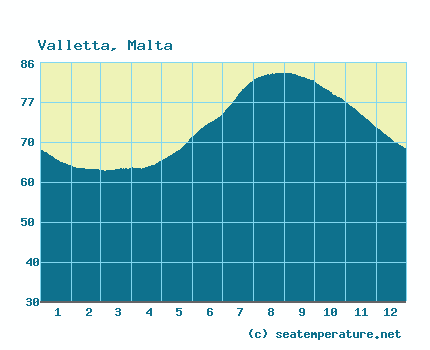 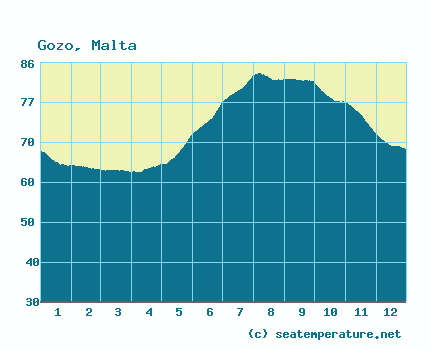 We process, analyze and store data for every beach and city in Malta. Below is a table with current weather data and trends in some places of the country.

Malta is located in Europe. The country is washed by the Mediterranean Sea. Malta - has a fairly long coastline. To determine the temperature of the water in it, we track 23 settlements and resorts.

Mediterranean with hot summers (from June to September about + 23ºС) and mild, relatively “wet» winters (+ 14-16ºС). Precipitation is about 530-570 mm per year, mainly in winter. But even in winter, clear and sunny weather prevails. At the end of summer, hot and dusty sirocco winds often come from the African mainland, while the north-west Mistral and warm sea winds predominate for most of the year. Humidity is high enough for most of the year.