Water temperature on the beaches of Macao

Most popular locations in Macao over the past week

Conditions of sea water on beaches in Macao

Now at all beaches in Macao, the water is heated to a comfortable temperature for swimming.

The water temperature in Macao has risen over the past 10 days, but has dropped compared to 30 days ago.

For the two most popular locations for swimming in Macao, the graphs of changes in the average water temperature throughout the year are as follows: 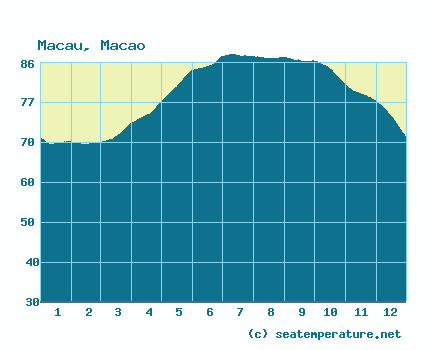 We process, analyze and store data for every beach and city in Macao. Below is a table with current weather data and trends in some places of the country.

Macau is located in Asia. The country is washed by the South China Sea. Macau is a small country. To determine the temperature of the water in it, we monitor only one locality.

The state is located on the border of tropical and subtropical climatic zones, due to its small size, the climate of the territory can be classified as subtropical marine, with cool winters and warm rainy summers. The average winter temperature (December - February) is about +12 o C, but the daytime temperature is almost always above +15 o C. The cold north winds characteristic of the eastern part of China rarely reach the limits of Macau, therefore the general temperature background is quite even. In summer, the average temperature is about +26 o C, and in July (the hottest month) it is about +29 o C. Up to 1800 mm of precipitation falls annually, and their maximum falls in the summer months (it rains mainly in the daytime). Humidity is high all year round, but it is in the summer that it reaches its maximum values. Oceanic winds can reach storm forces at any time of the year, typhoons and storms coming from the South China Sea.