Water temperature on the beaches of Lithuania

Most popular locations in Lithuania over the past week

Conditions of sea water on beaches in Lithuania

Now in the beaches in Lithuania, the water temperature is very low and not suitable for swimming.

The water temperature in Lithuania tends to decrease, its value has decreased both over the last 10 days and over the month.

Today the warmest water in Lithuania is recorded in Sventoji. Its value in this location is 46°F. And the coldest one is in Curonian Lagoon, its value 43°F.

For the two most popular locations for swimming in Lithuania, the graphs of changes in the average water temperature throughout the year are as follows: 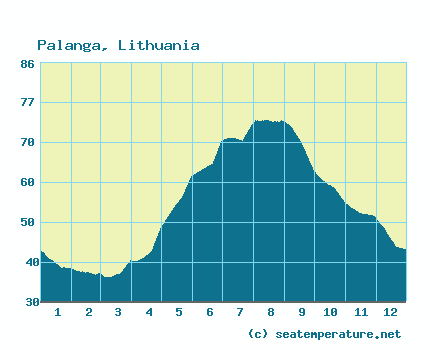 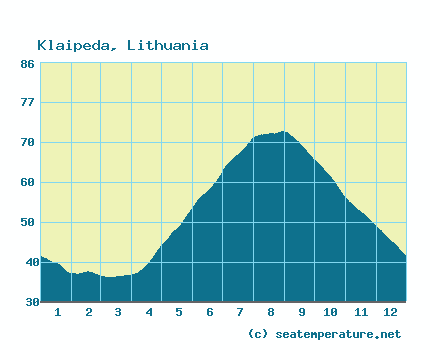 We process, analyze and store data for every beach and city in Lithuania. Below is a table with current weather data and trends in some places of the country.

Lithuania is located in Europe. The country is washed by the Baltic Sea. Lithuania is a small country. To determine the temperature of the water in it, we track only six settlements.

The climate of Lithuania is transitional from marine to continental, determined by marine air masses from the Atlantic and the Baltic Sea. Moist sea wind tempers the summer heat and softens the winter cold. The proximity to the sea is also associated with general weather instability. Summer in Lithuania is not hot, the average July temperature is about + 17ºС. It rains quite often, regardless of the season. Winters are warm and damp - in January the average temperature is about -7ºС, the snow cover is unstable, although real frosts are not uncommon. Precipitation falls from 630 mm per year in the east of the country to 900 mm on the western slopes of the Zemait Upland. Long drizzling rains are typical at any time of the year, as well as summer fogs and thunderstorms.