Water temperature on the beaches of Libya

Most popular locations in Libya over the past week

Conditions of sea water on beaches in Libya

Now in beaches in Libya, the water temperature is on the line of comfort. There are locations with cool water, there are places with more or less comfortable water.

The water temperature in Libya tends to decrease, its value has decreased both over the last 10 days and over the month.

Today the warmest water in Libya is recorded in Bengazi. Its value in this location is 71°F. And the coldest one is in Tripoli, its value 69°F.

For the two most popular locations for swimming in Libya, the graphs of changes in the average water temperature throughout the year are as follows: 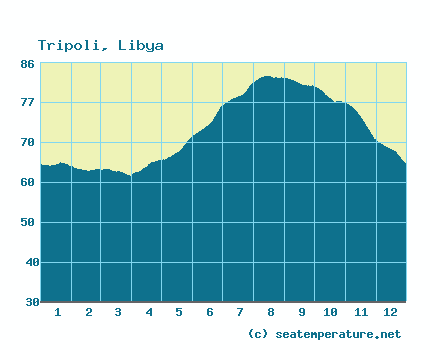 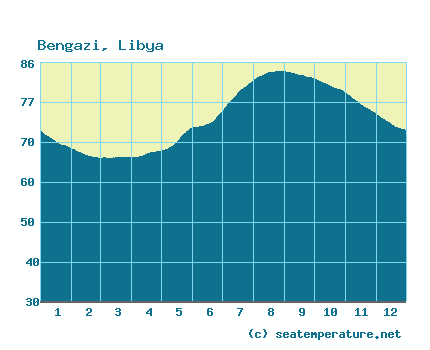 We process, analyze and store data for every beach and city in Libya. Below is a table with current weather data and trends in some places of the country.

Libya is located in Africa. The country is washed by the Mediterranean Sea. Libya is a small country. To determine the temperature of the water in it, we track only three settlements.

In most of the territory - tropical desert, in the north - subtropical Mediterranean. On the coast, the average January temperature is around + 12ºC, in July from + 26ºC to + 29ºC. Throughout the rest of the territory, the average July temperatures rise to +36 o C, but at night the air cools to zero or even lower. Precipitation is up to 250-350 mm per year, on the plateau of Al Ahdar - up to 600 mm. In some areas there is no rain for several years in a row. During the spring solstice along the coast in the northwestern regions, a searing wind «die» coming from the Sahara.