Water temperature on the beaches of Kuwait

Most popular locations in Kuwait over the past week

Conditions of sea water on beaches in Kuwait

Now at all beaches in Kuwait, the water is heated to a comfortable temperature for swimming.

The water temperature in Kuwait tends to decrease, its value has decreased both over the last 10 days and over the month.

Today the warmest water in Kuwait is recorded in Al Khiran. Its value in this location is 73°F. And the coldest one is in Kuwait, its value 72°F.

For the two most popular locations for swimming in Kuwait, the graphs of changes in the average water temperature throughout the year are as follows: 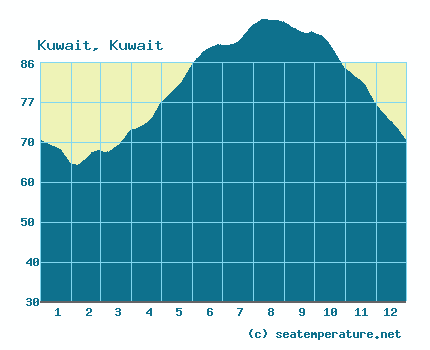 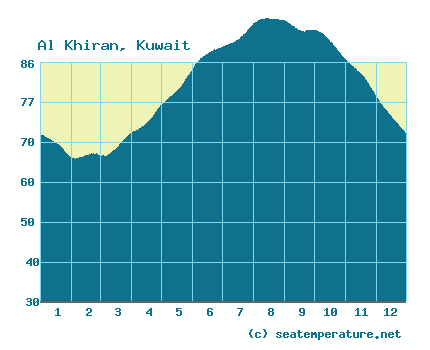 We process, analyze and store data for every beach and city in Kuwait. Below is a table with current weather data and trends in some places of the country.

Kuwait is located in the Middle East. The country is washed by the Persian Gulf. Kuwait is a small country. To determine the temperature of the water in it, we track only two settlements.

Tropical, hot and very dry. For most of the year, the country has experienced steady, hot and dry weather. In summer (June-August) the temperature in the shade reaches +37 o C, but in the sun it can reach +47 o C, even at night the thermometer does not drop below +30 o C. In winter, in December-January, warm sunny prevail days with air temperature from +16 C to +18 oC. The coastal water temperature ranges from +16 C in winter to + 26-37 C in summer. Precipitation is rare and does not exceed 175 mm per year. In some months, mainly in the summer, not a drop of rain falls. In the summer, from May to October, the dry and dusty northwestern Shimal winds are frequent, which bring hot air masses from the desert regions of the Arabian Peninsula with temperatures reaching up to +50 o C. during the daytime . The sandstorms associated with them can last for several days.