Water temperature on the beaches of Kiribati

Most popular locations in Kiribati over the past week

Conditions of sea water on beaches in Kiribati

Now in all beaches in Kiribati, the water temperature is quite comfortable, and in some places it is very warm and even hot.

The water temperature in Kiribati tends to decrease, its value has decreased both over the last 10 days and over the month.

Today the warmest water in Kiribati is recorded in Betio Village. Its value in this location is 81°F. And the coldest one is in Tabwakea Village, its value 76°F.

For the two most popular locations for swimming in Kiribati, the graphs of changes in the average water temperature throughout the year are as follows: 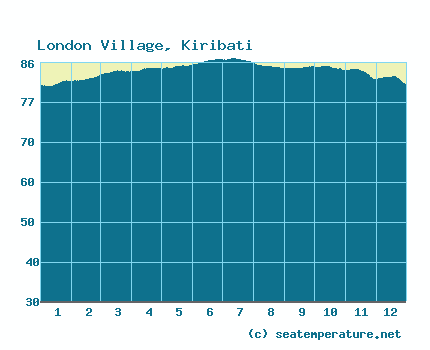 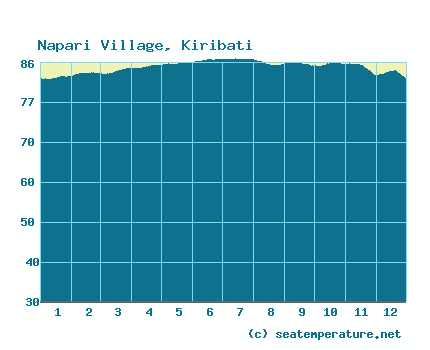 We process, analyze and store data for every beach and city in Kiribati. Below is a table with current weather data and trends in some places of the country.

Kiribati is located in Australia and Oceania. The country is washed by the Pacific Ocean. Kiribati - has a fairly long coastline. To determine the temperature of the water in it, we track 16 settlements and resorts.

Equatorial marine in the central part of the Gilbert island group and tropical marine in the northern and southern parts of the country. The main feature of the local climate is its homogeneity - the air temperature never drops below +22 C in the usual range from +28 C to +32 C in different parts of the country. From March to October, the islands are influenced by northwestern trade winds, which somewhat alleviate the heat, and from December to March, powerful westerly winds are frequent, bringing storms and showers. Precipitation falls from 1000-1200 mm. per year in the central regions of the Gilbert Islands, up to 3000 mm. per year over the Line Islands. Maximum rains occur between November and February. The lowlands of the majority of the islands of Kiribati lead to the fact that powerful showers literally flood them with water, and at the same time there is a shortage of fresh water.A certain danger is the fluctuation of the sea during the ebb and flow, as well as during winter storms, when they are literally full rolling over some small islands.