Water temperature on the beaches of Jordan

Most popular locations in Jordan over the past week

Conditions of sea water on beaches in Jordan

Now at all beaches in Jordan, the water is heated to a comfortable temperature for swimming.

The water temperature in Jordan has risen over the past 10 days, but has dropped compared to 30 days ago.

Today the warmest water in Jordan is recorded in Aqaba. Its value in this location is 75°F. And the coldest one is in Suwaymah, its value 74°F.

For the two most popular locations for swimming in Jordan, the graphs of changes in the average water temperature throughout the year are as follows: 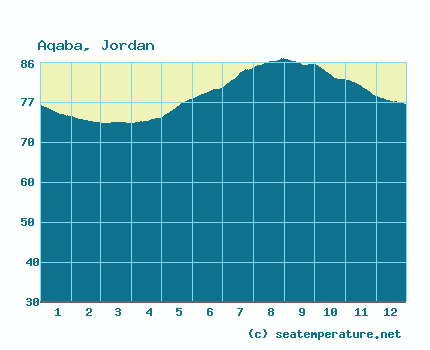 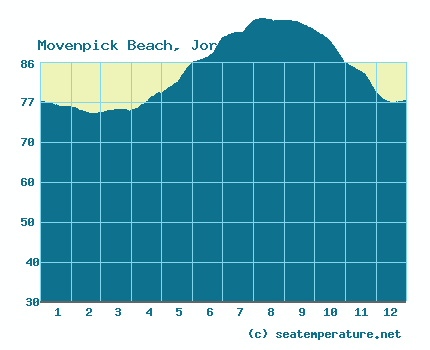 We process, analyze and store data for every beach and city in Jordan. Below is a table with current weather data and trends in some places of the country.

Jordan is located in the Middle East. The country is washed by two seas, such as the Red Sea, the Dead Sea. Jordan is a small country. To determine the temperature of the water in it, we monitor only four settlements.

Subtropical Mediterranean and continental, very dry. Average January temperatures are from + 8 ° С to + 14 ° С, July - from + 28 ° С to + 40 ° С. At the same time, regardless of the season, the difference between day and night temperatures can reach 30°C or more, so it’s quite cool at night. Precipitation falls from 100 to 700 mm per year, and quite unevenly. In summer, there is practically no rainfall, from November to April, in the north-west of the country it rains heavily, while the eastern regions receive much less rainfall. In the south of the country, in the region of the Gulf of Aqaba, a special microclimate has formed - it is always a little hotter and drier here than in the north.