Water temperature on the beaches of Japan

Most popular locations in Japan over the past week

Conditions of sea water on beaches in Japan

Now in the beaches in Japan, the water temperature has different values. There are very cold locations, there are cool places, and there are resorts with warm and comfortable water.

The water temperature in Japan tends to decrease, its value has decreased both over the last 10 days and over the month.

Today the warmest water in Japan is recorded in Yonakuni. Its value in this location is 78°F. And the coldest one is in Hokkaido, its value 41°F.

For the two most popular locations for swimming in Japan, the graphs of changes in the average water temperature throughout the year are as follows: 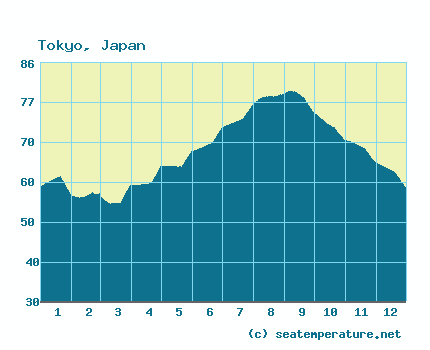 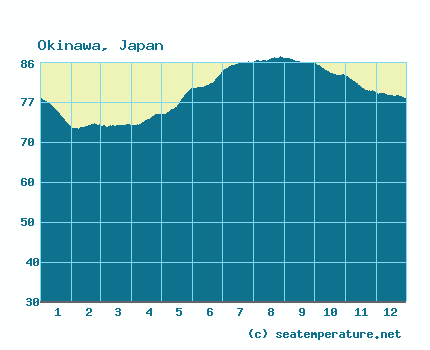 We process, analyze and store data for every beach and city in Japan. Below is a table with current weather data and trends in some places of the country.

Japan is in Asia. The country is washed by five seas, such as the Sea of ​​Japan, the Pacific Ocean, East China Sea, Aki Sea, and the Philippine Sea. Japan is a large resort country and has a long coastline. To determine the temperature of the water in it, we track 195 settlements and resorts.

In the north of the country, the climate is temperate, and in the south - subtropical and tropical monsoon. Summer is quite hot throughout the country - from +30 C in the north to +38 C in the south. In summer, the maximum rainfall is from 700 mm. in the north, up to 1200 in the south, while the humidity is very high, typhoons are frequent. The average temperature in winter is quite low - from -15 C on Hokkaido, to -5 on about. Honshu and up to +16 C on the Ryukyu archipelago. In this case, a sufficiently large amount of snow falls for such a southern latitude. Precipitation in most of the country falls 1700-2000 mm. per year, in the south of the country - up to 4000 mm. The best time to visit the islands is spring (sakura blossom time) and the end of September - early October. At this time, the temperature usually does not fall below 17-20 o C, and air humidity is slightly lower (although cold winds from the mainland are frequent in the spring and typhoons in the fall).