Water temperature on the beaches of Israel

Most popular locations in Israel over the past week

Conditions of sea water on beaches in Israel

Now at all beaches in Israel, the water is heated to a comfortable temperature for swimming.

The water temperature in Israel tends to decrease, its value has decreased both over the last 10 days and over the month.

Today the warmest water in Israel is recorded in Neve Zohar. Its value in this location is 75°F. And the coldest one is in Zikim Beach, its value 72°F.

For the two most popular locations for swimming in Israel, the graphs of changes in the average water temperature throughout the year are as follows: 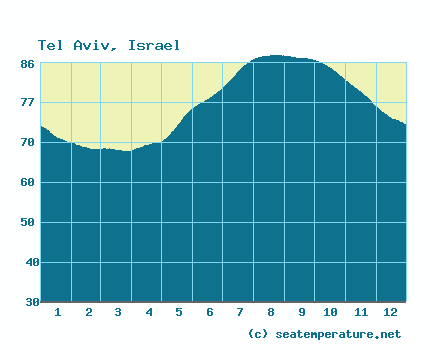 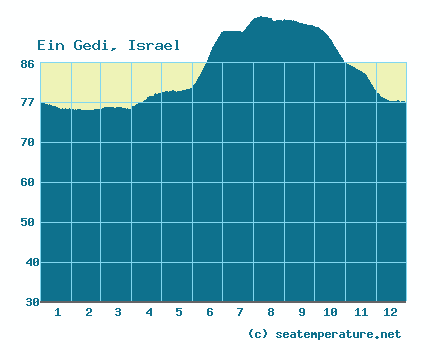 We process, analyze and store data for every beach and city in Israel. Below is a table with current weather data and trends in some places of the country.

Israel is in the Middle East. The country is washed by three seas, such as the Mediterranean Sea, the Red Sea, the Dead Sea. Israel - has a fairly long coastline. To determine the temperature of the water in it, we track 16 settlements and resorts.

The climate of Israel is subtropical, although due to the peculiarities of its geographical position and topography, even in such a small area, there are areas with tropical dry and temperate types of climate. The average January temperature ranges from + 6°C at night to + 18°C, July - from + 23°C to + 30°C. True, the same temperature due to the difference in air humidity in different parts of the country is also perceived differently. In Eilat, it is warm throughout the year (from April to October, the average air temperature is about + 26°C, the maximum reaches + 40°C), while in the north of the country and in the mountainous regions, the contrasts are much greater. In Tiberius, for example, the average January temperature fluctuates around + 18 ° С, in July the thermometer’s column is close to + 37 ° С. In the summer, hot, drying winds blow from the Arabian and Sinai deserts. «sharav «and» hamsin», And in winter frequent invasions of moist and warm air masses from the Mediterranean. Precipitation falls from 100 to 800 mm per year, mainly in winter (from November to March). Most of them are usually recorded in December-February. In summer, the weather is dry throughout the country - there are frequent years when from June to September there is not a drop of rain at all. The water temperature in the Dead Sea is from + 19°C in February to + 31°C in August. The average air temperature here in autumn and spring fluctuates around + 25 ° С, in winter - + 20 ° С, and in summer it exceeds + 32 ° С. The water temperature off the Mediterranean coast from May to September is above + 20 ° С. In the Red Sea, water warms up to + 24°C even in winter, and in the summer months right off the coast it can resemble a broth in its characteristics,although below the reefs and in depth it is still quite comfortable for swimming.