Water temperature on the beaches of Iraq

Most popular locations in Iraq over the past week

Conditions of sea water on beaches in Iraq

Now in beaches in Iraq, the water temperature is on the line of comfort. There are locations with cool water, there are places with more or less comfortable water.

The water temperature in Iraq tends to decrease, its value has decreased both over the last 10 days and over the month.

For the two most popular locations for swimming in Iraq, the graphs of changes in the average water temperature throughout the year are as follows: 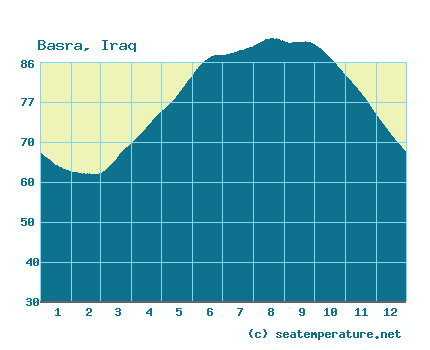 We process, analyze and store data for every beach and city in Iraq. Below is a table with current weather data and trends in some places of the country.

Iraq is located in the Middle East. The country is washed by the Persian Gulf. Iraq is a small country. To determine the temperature of the water in it, we monitor only one locality.

Subtropical in the north and tropical in the south, hot and dry. Due to the fact that the climate is sharply continental, it is important to remember about extremely hot summers and cold winters. Especially in the north of the country, in the mountainous Iraqi Kurdistan. The most comfortable seasons for visiting the country are autumn and spring. The average summer temperatures in the north reach + 40 ° С with maxima at + 50-53 ° С, and in most central and southern regions exceed + 50 ° С. In winter, average temperatures range from + 4°C to + 13-16°C with a possible cooling to -10°C in the north and -5°C in the south. At the same time, at night, the thermometer column often drops to + 16-19°C in the summer and to -5-8°C in the winter. Precipitation falls from 50 mm per year in the south and up to 1500 mm in the northeast, mainly in the winter months (November-February).Moreover, in the summer period (from May to October), most of the territory of the rains is often not observed at all, but the humidity is quite high (up to 100% in the southern regions and up to 85% in the north). In the northeastern regions, on mountain slopes, occasional showers are not uncommon in any period, and in winter there are quite heavy snowfalls. In the summer, strong northwest winds are observed, bringing dusty and sandstorms with them.