Water temperature on the beaches of Iran

Most popular locations in Iran over the past week

Conditions of sea water on beaches in Iran

Now in the beaches in Iran, the water temperature ranges from cool to comfortable and warm.

The water temperature in Iran tends to decrease, its value has decreased both over the last 10 days and over the month.

Today the warmest water in Iran is recorded in Kish. Its value in this location is 81°F. And the coldest one is in Bender Khomeini, its value 71°F.

For the two most popular locations for swimming in Iran, the graphs of changes in the average water temperature throughout the year are as follows: 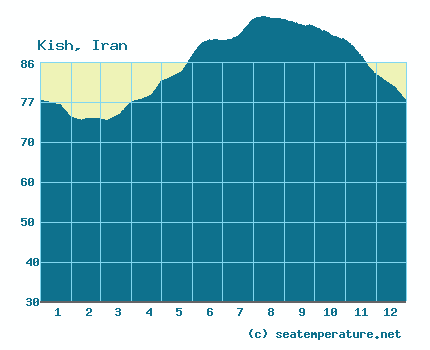 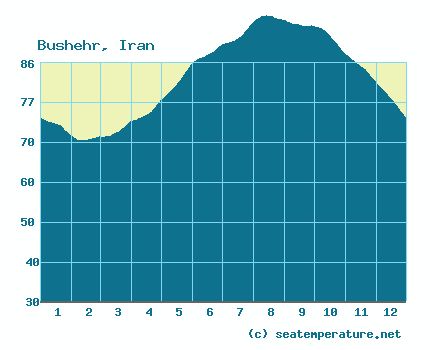 We process, analyze and store data for every beach and city in Iran. Below is a table with current weather data and trends in some places of the country.

Iran is located in the Middle East. The country is washed by the Persian Gulf. Iran is a small country. To determine the temperature of the water in it, we track only five settlements.

Subtropical in the north and tropical in the south, for the most part - continental and continental mountain. The coast of the Persian and Oman gulfs is located in a zone of hot and humid tropical climate, the temperature ranges from + 16-18°C in winter to + 24-30°C in summer, with a relatively large amount of precipitation (up to 1000 mm on mountain slopes, up to 600 mm in flat areas). The central regions of the country are dominated by an arid subtropical climate, while the uniformity of weather conditions is greatly distorted by the mountainous terrain. The temperature here ranges from + 3-8°C in the winter to + 30-32°C with regular temperature increases up to + 40°C and precipitation not more than 250 mm per year. In the mountainous regions of Elburs and Zagros, it is much cooler (in summer + 16-26°C, in winter from -4°C to + 12°C), and wetter (rainfall is up to 2000 mm per year).