Water temperature on the beaches of Indonesia

Most popular locations in Indonesia over the past week

Conditions of sea water on beaches in Indonesia

Now in all beaches in Indonesia, the water is very warm and comfortable for swimming.

The water temperature in Indonesia tends to decrease, its value has decreased both over the last 10 days and over the month.

Today the warmest water in Indonesia is recorded in Palu. Its value in this location is 87°F. And the coldest one is in Bintan, its value 82°F.

For the two most popular locations for swimming in Indonesia, the graphs of changes in the average water temperature throughout the year are as follows: 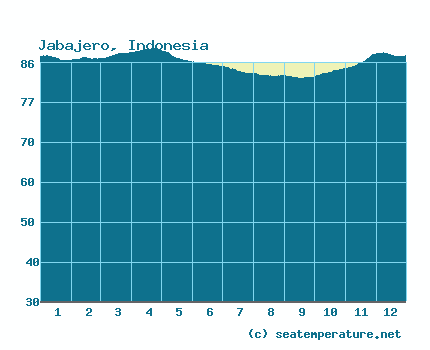 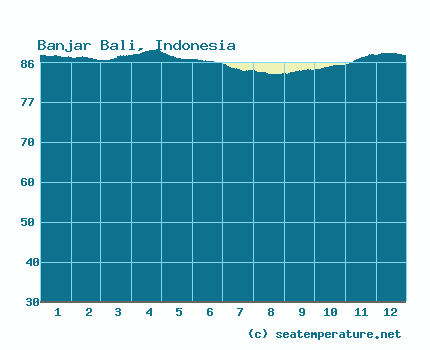 We process, analyze and store data for every beach and city in Indonesia. Below is a table with current weather data and trends in some places of the country.

Indonesia is located in Asia. The country is washed by more than ten seas, such as the Indian Ocean, the Bay of Bengal, the Pacific Ocean, the Moluccan Sea, the Sea of Bali, the Sea of Banda and others. Indonesia is a large resort country and has a long coastline. To determine the temperature of the water in it, we track 318 settlements and resorts.

Equatorial and subequatorial marine. In lowland areas, the temperature most of the year stays between + 26-27 ° С, in mountainous areas it is somewhat cooler. In the southern and eastern regions it is hotter and the climate has quite pronounced seasons - rainy (September-May) and relatively dry (May-October). Sunny weather persists almost the whole year, since most of the precipitation falls in mountainous areas, mainly early in the morning or at night. Total precipitation is more than 3000 mm per year. On the island of Bali, the climate is equatorial monsoon, having only 2 seasons - dry (June-October) and humid (November-April), almost not differing in temperature - + 23-27 ° С. Most precipitation falls in January-February. Sea water temperature + 26-28 ° С all year round.