Water temperature on the beaches of India

Most popular locations in India over the past week

Conditions of sea water on beaches in India

Now in all beaches in India, the water temperature is quite comfortable, and in some places it is very warm and even hot.

The water temperature in India has risen over the past 10 days, but has dropped compared to 30 days ago.

Today the warmest water in India is recorded in Calicut. Its value in this location is 84°F. And the coldest one is in Diamond Harbour, its value 75°F.

For the two most popular locations for swimming in India, the graphs of changes in the average water temperature throughout the year are as follows: 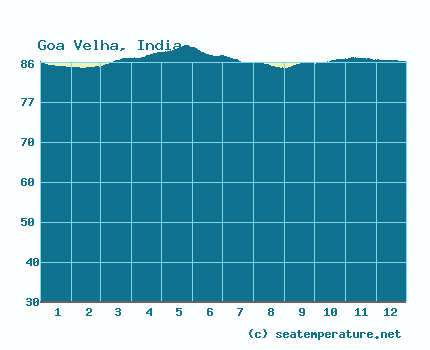 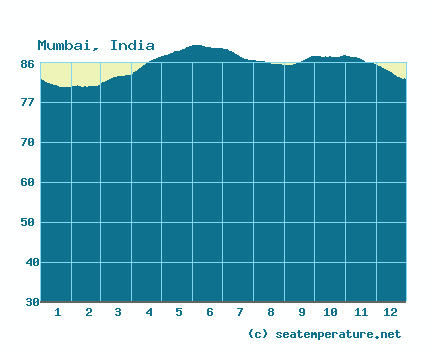 We process, analyze and store data for every beach and city in India. Below is a table with current weather data and trends in some places of the country.

India is located in Asia. The country is washed by three seas, such as the Arabian Sea, the Bay of Bengal, the Laccadive Sea. India is a large resort country and has a long coastline. To determine the temperature of the water in it, we track 103 settlements and resorts.

Mostly tropical, tropical monsoon in the north, subequatorial monsoon in the south. Due to the high fragmentation of the surface and the proximity of the ocean, climatic conditions are very diverse - from the extremely cold arid regions of the Himalayas to the humid tropical regions of the south. Depending on the location, 3 to 6 seasons are distinguished. On the plains, the average January temperatures are from + 15ºС in the north to + 27ºС in the south, in May - from + 28ºС to + 35ºС. In northern India, the temperature in winter can drop to -2ºС, and in mountainous regions it can reach -20ºС, and in the hot season it can rise to + 48ºС in the shade. In the southern part of the country, sharp temperature drops are not observed. Precipitation falls from 60-100 mm. per year (in the region of the Thar desert in the west of the country) and 300-400 mm. in the central areas of the Dean, up to 3000-6000 mm. in the Eastern Himalayas and on the outer slopes of the Ghats and even up to 11-12 thousand mm. (!) in Cherapunji (Chera-Punji) on the Shillong plateau (the wettest place on Earth).