Water temperature on the beaches of Honduras

Most popular locations in Honduras over the past week

Conditions of sea water on beaches in Honduras

Now in all beaches in Honduras, the water is very warm and comfortable for swimming.

The water temperature in Honduras has increased both over the past 10 days and over a month.

Today the warmest water in Honduras is recorded in La Ceiba. Its value in this location is 84°F. And the coldest one is in Amapala, its value 82°F.

For the two most popular locations for swimming in Honduras, the graphs of changes in the average water temperature throughout the year are as follows: 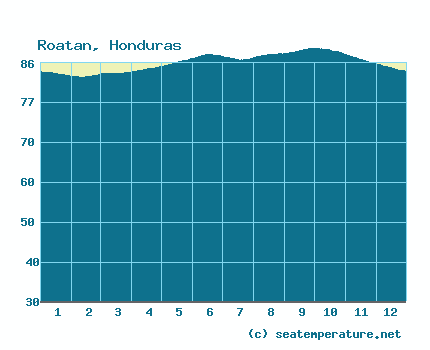 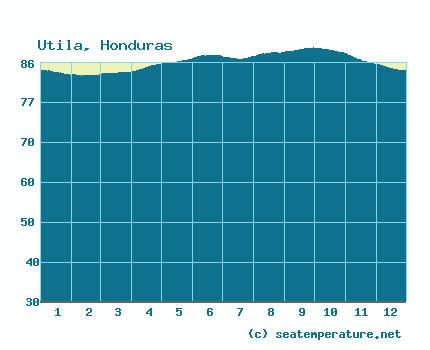 We process, analyze and store data for every beach and city in Honduras. Below is a table with current weather data and trends in some places of the country.

Honduras is located in Central America. The country is washed by two seas, such as the Caribbean, the Pacific Ocean. Honduras - has a fairly long coastline. To determine the temperature of the water in it, we track 20 settlements and resorts.

Tropical trade winds with fairly sharp differences in weather conditions between regions of the country. Seasonal temperature changes are small, but the Caribbean coast and other eastern regions up to 800 m are noticeably warmer than the central regions and belong to the hot zone of Tierra Calient, while the bulk of the country lies in the moderately hot zone of Tierra Templa, possessing all the features of a mountain climate. The average monthly air temperature on the Caribbean coast ranges from +24 C in winter to +27 C in summer. Precipitation is up to 2700 mm per year (the wettest period is from September-October to January-February, although in the rest of the months it rains almost every day). The northern part of the coast is somewhat drier - there are two relatively dry periods (from December to April and from August to September), and the heat is tempered by sea breezes.On the islands of Islas de la Bahia, the climate is close to the subtropical sea, and the heat is mitigated by constant trade winds from the sea. Destructive tropical hurricanes are frequent. The central highlands are noticeably cooler than the humid east coast, the usual temperature in the summer is around + 25 C (peak values ​​are often at + 30-32 C), in winter it is around +22o C. Moreover, in the highlands in winter, the air temperature often drops to + 8-10 o C, but in summer the air warms up to + 22-28 o C. The amount of precipitation is noticeably different on the windward (northern and eastern) and leeward slopes of the mountains - 3000 and 1700 mm, respectively. The Pacific coast has a hot and relatively dry climate. The average air temperature here fluctuates around the mark of +26 C all year round, and precipitation, depending on the nature of the coastal currents, falls from 2000 to 3000 mm (the maximum falls on the period from June to October).