Water temperature on the beaches of Haiti

Most popular locations in Haiti over the past week

Conditions of sea water on beaches in Haiti

Now in all beaches in Haiti, the water is very warm and comfortable for swimming.

The water temperature in Haiti tends to decrease, its value has decreased both over the last 10 days and over the month.

Today the warmest water in Haiti is recorded in Arrondissement d'Arcahaie. Its value in this location is 85°F. And the coldest one is in Les Irois, its value 82°F.

For the two most popular locations for swimming in Haiti, the graphs of changes in the average water temperature throughout the year are as follows: 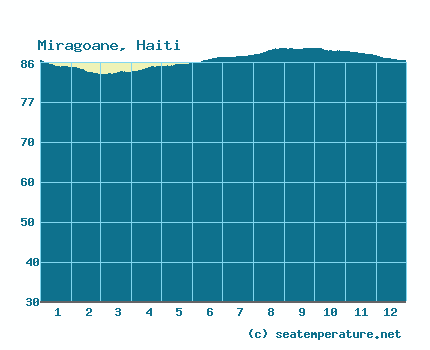 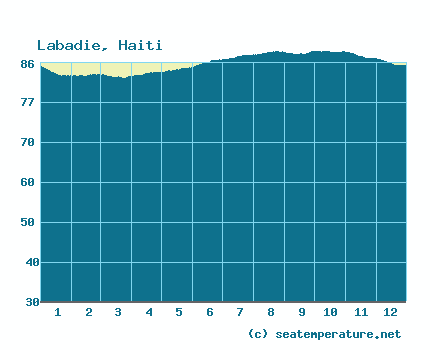 We process, analyze and store data for every beach and city in Haiti. Below is a table with current weather data and trends in some places of the country.

Haiti is located in Central America. The country is washed by the Gulf of California. Haiti - has a fairly long coastline. To determine the temperature of the water in it, we track 35 settlements and resorts.

Tropical trade wind. Haiti's climate as a whole is rather hot and humid, with air temperature changing more strongly during the day than from season to season. The average daytime temperature in the summer months (June-August) is around the mark of +28 o C, with a maximum of +38 o C, while at night it can drop to +20 o C. In the winter (December -February) the average monthly temperature is about +22 o C, rising on some days to +30 oC. Moreover, in mountainous areas it is always 2-5 degrees cooler than on the coast. Precipitation is up to 2100 mm per year. The nature of their distribution is rather uneven - on the northern coast, the rainy season falls on the period from October to May, while on the southern coast the maximum rainfall occurs from May to October. Mountain slopes receive an average of 15-20% more rain than coastal areas, with up to 2000 mm of rain per year on the windward slopes, while not more than 500-800 mm on the leeward slopes and in the intermontane basins. Destructive tropical hurricanes passing over the territory of the country are frequent, mainly from June to September-October. Droughts are also not uncommon, especially in recent times.