Water temperature on the beaches of Guyana

Most popular locations in Guyana over the past week

Conditions of sea water on beaches in Guyana

Now in all beaches in Guyana, the water is very warm and comfortable for swimming.

The water temperature in Guyana tends to decrease, its value has decreased both over the last 10 days and over the month.

Today the warmest water in Guyana is recorded in Georgetown. Its value in this location is 82°F. And the coldest one is in New Amsterdam, its value 81°F.

For the two most popular locations for swimming in Guyana, the graphs of changes in the average water temperature throughout the year are as follows: 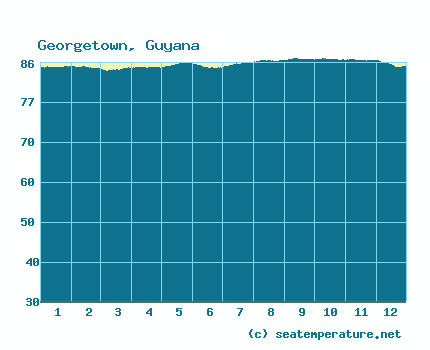 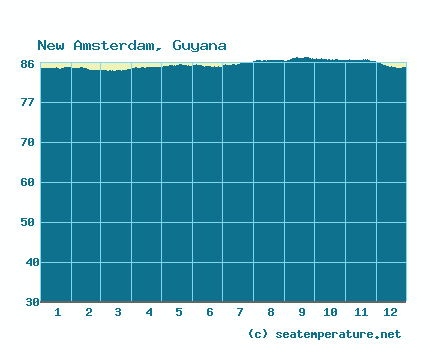 We process, analyze and store data for every beach and city in Guyana. Below is a table with current weather data and trends in some places of the country.

Guyana is located in South America. The country is washed by the Atlantic Ocean. Guyana is a small country. To determine the temperature of the water in it, we monitor only four settlements.

Subequatorial, hot and humid. The average monthly temperature on the coast of the Atlantic Ocean ranges from +27 C to +32 C all year round. Daytime temperature here rarely goes beyond + 22-31°C due to the influence of the ocean and northeast trade winds. As you move south into the mountainous regions, the temperature gradient becomes more unstable - on the mountain slopes it all depends on the height of the place above sea level and solar exposure. Therefore, in some areas of the Guiana Highlands, the night temperature can drop to +6 o C, and during the day the air warms up to + 38-40 oC. Guyana is one of the wettest countries on the planet. Over a year, an average of 3000 mm falls in the mountainous regions (often 4000 mm), on the coast - up to 2300 mm, and in the southern savannahs - up to 1600 mm of precipitation. At the same time, there are two rainy seasons associated with the arrival of moist air masses from the ocean to the country - summer (from April-May to June-August) and winter (from November-December to January). High and relative humidity is 80% on the coast, up to 70% in the savannah and almost 100% in the wooded mountainous regions of the center of the country. For a European, such humidity is difficult to tolerate.