Water temperature on the beaches of Guatemala

Most popular locations in Guatemala over the past week

Conditions of sea water on beaches in Guatemala

Now in all beaches in Guatemala, the water is very warm and comfortable for swimming.

The water temperature in Guatemala tends to decrease, its value has decreased both over the last 10 days and over the month.

Today the warmest water in Guatemala is recorded in Champerico. Its value in this location is 85°F. And the coldest one is in Livingston, its value 81°F.

For the two most popular locations for swimming in Guatemala, the graphs of changes in the average water temperature throughout the year are as follows: 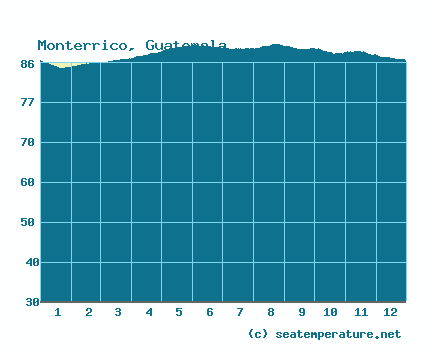 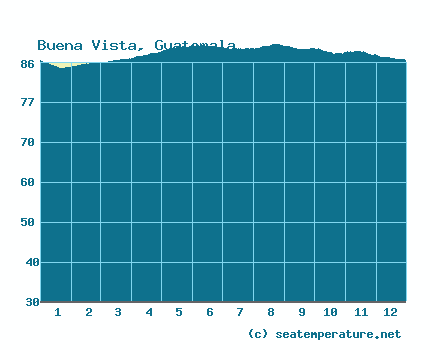 We process, analyze and store data for every beach and city in Guatemala. Below is a table with current weather data and trends in some places of the country.

Guatemala is located in Central America. The country is washed by two seas, such as the Caribbean, the Pacific Ocean. Guatemala is a small country. To determine the temperature of the water in it, we monitor only four settlements.

Subequatorial trade wind-monsoon, moist in low-lying areas and cool in mountainous areas. The relief of the country has a strong influence on climatic conditions - the mountainous regions are always cooler than the lowlands, and the meridional direction of the ridges leads to the formation of numerous areas with a local microclimate in the inner regions. Three high-altitude climatic zones stand out: hot and humid “Tierra Caliente» (from 0 m to 800 m above sea level), moderately hot and drier “Tierra Templa» (from 800 to 2000 m) and cool (often called “ cold ») and dry“ Tierra Fria «- above 2000 m. Moreover, the eastern regions of the country adjacent to the Caribbean Sea are always hotter and rainier than the western ones. In the mountains and on the plateau, the average temperature ranges from +6 C in winter to +20 C in summer, on the coast all year round the temperature is around +27o C. The two seasons are quite clearly distinguished - relatively cool and rainy winters (from May to October) and hot, dry summers (from November to April). Moreover, even neighboring sections of the same area can differ markedly in air temperature and rainfall from each other. Precipitation falls from 500 mm on the western slopes of the mountains, to 2500 mm on the eastern slopes of El Peten and the Caribbean coast. The Pacific coast has an average annual temperature of +27 C with very high humidity in the summer (in winter it decreases markedly) and the amount of precipitation (up to 1900 mm per year). In the central regions of the country and in the intermontane basins, the average temperature in the summer is near +23 o C, in winter - +17 oC. The rainy season lasts from May to September, while a characteristic feature of these places is the rainfall (not more than 1300 mm per year), mostly in the afternoon and evening (the sky is cloudless at night and in the morning, which leads to a noticeable cooling in this period, sometimes even before frost on the ground). The climate of the north-eastern part of the country is hot (average temperature all year round about +29 C) and humid (up to 2500 mm) with high humidity (about 95% all year round).