Water temperature on the beaches of Guam

Most popular locations in Guam over the past week

Conditions of sea water on beaches in Guam

Now in all beaches in Guam, the water is very warm and comfortable for swimming.

The water temperature in Guam has increased both over the past 10 days and over a month.

Today the warmest water in Guam is recorded in Tumon. Its value in this location is 85°F. And the coldest one is in Piti, its value 84°F.

For the two most popular locations for swimming in Guam, the graphs of changes in the average water temperature throughout the year are as follows: 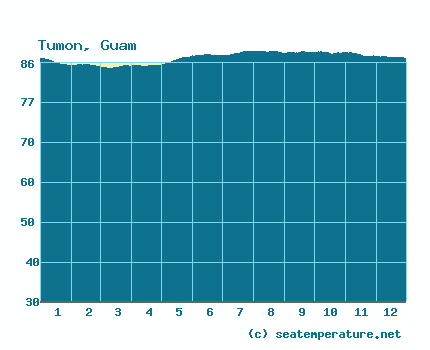 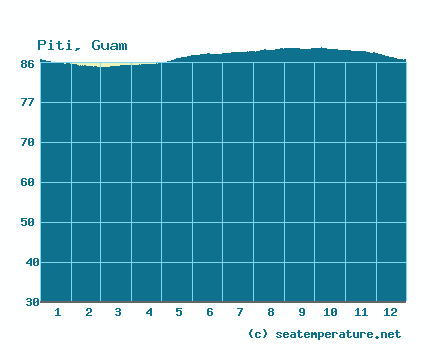 We process, analyze and store data for every beach and city in Guam. Below is a table with current weather data and trends in some places of the country.

Guam is located in Australia and Oceania. The country is washed by the Pacific Ocean. Guam is a small country. To determine the temperature of water in it, we track only ten settlements or resorts.

Tropical marine, trade wind. Guam’s climate is warm and humid, almost all year round the air temperature is around + 25-30°C (the warmest period is from May to July), while the daytime temperature ranges from + 28°C to + 33°C, and night - from + 23 ° С to + 25 ° С. Only during the period of influence of the northeast trade winds (from July to November) is there a slight decrease in temperature (up to + 22-27 ° С). Precipitation is up to 2000 mm per year, while the average air humidity all year round leaves about 78-82%. Two seasons are clearly distinguished: dry “fanumnangan» (fanumnangan, from December-January to June) and rainy “fanunchanan» (fanuchanan, from July to December). The Mariana Islands are in the zone of origin of typhoons, which are gaining strength already having passed the line of the archipelago. However, from June-August to November-December, periods with strong winds and storms are not uncommon.