Water temperature on the beaches of Guadeloupe

Most popular locations in Guadeloupe over the past week

Conditions of sea water on beaches in Guadeloupe

Now in all beaches in Guadeloupe, the water is very warm and comfortable for swimming.

The water temperature in Guadeloupe has risen over the past 10 days, but has dropped compared to 30 days ago.

Today the warmest water in Guadeloupe is recorded in Pointe A Pitre. Its value in this location is 82°F. And the coldest one is in Petit Bourg, its value 80°F.

For the two most popular locations for swimming in Guadeloupe, the graphs of changes in the average water temperature throughout the year are as follows: 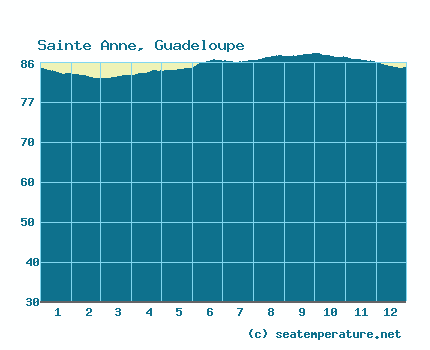 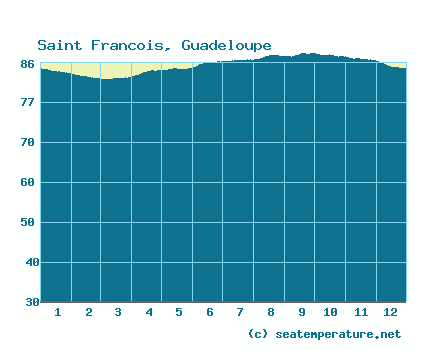 We process, analyze and store data for every beach and city in Guadeloupe. Below is a table with current weather data and trends in some places of the country.

Guadeloupe is located in Central America. The country is washed by the Caribbean Sea. Guadeloupe - has a fairly long coastline. To determine the temperature of the water in it, we track 20 settlements and resorts.

Tropical marine.The average air temperature is +26 o C, from December to February, the temperature is around +22 o C, from March to May the temperature rises to 30-32 o C. The trade winds, here called «alize», often moderate the heat somewhat. In the summer (June-August), the temperature ranges from +26 to +28 o C. The water temperature stays around +25 C almost all year round. Precipitation falls from 600 to 2000 mm. in year.Due to the elevated terrain of Bas-Ter, there is slightly more rainfall here than on Grand-Ter. The wettest period is from July to November, when tropical hurricanes pass over the territory of Guadeloupe. During this period, air humidity averages 85%. However, heavy rainfall or sunny dry weather can happen at any time of the year. Between December and April-May, the driest weather is maintained with an average humidity of about 77%.