Water temperature on the beaches of Greenland

Most popular locations in Greenland over the past week

Conditions of sea water on beaches in Greenland

Now in the beaches in Greenland, the water temperature is very low and not suitable for swimming.

The water temperature in Greenland has risen over the past 10 days, but has dropped compared to 30 days ago.

Today the warmest water in Greenland is recorded in Kangamiut. Its value in this location is 35°F. And the coldest one is in Upernavik, its value 29°F.

For the two most popular locations for swimming in Greenland, the graphs of changes in the average water temperature throughout the year are as follows: 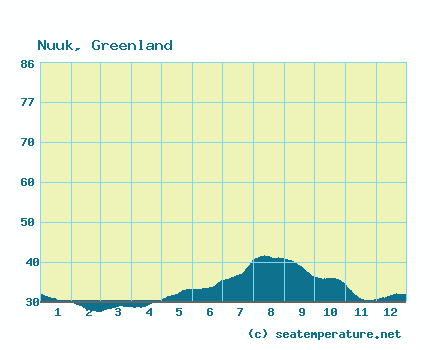 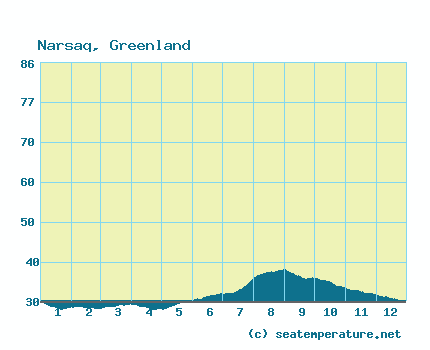 We process, analyze and store data for every beach and city in Greenland. Below is a table with current weather data and trends in some places of the country.

Greenland is located in Europe. The country is washed by the Atlantic Ocean and the Baffin Sea. Greenland - has a fairly long coastline. To determine the temperature of the water in it, we track 11 settlements.

The climate is subarctic and arctic, in coastal areas - marine, in glacial fields - continental. Average July temperatures range from + 3°C in the north to + 9°C in the south, and in January from -8°C to -17°C, respectively. In summer, the daytime temperature sometimes rises to + 21°C, but often even during this period in the central regions of the island it barely exceeds 0°C (on the coasts, especially on the west, the air warms up much better). The lowest temperatures in winter are observed on the east coast - up to -46 ° С, and due to constant winds, subjectively, it seems much colder. From the expanses of the ice sheet, strong Piterac stock winds blow almost all year round, the speed of which sometimes reaches 60-70 meters per second. The average annual rainfall in the south is about 1080 mm, in the capital - up to 600 mm,in the far north - 100-200 mm. The maximum amount of precipitation falls on the autumn-winter period, however, at any time of the year, due to the instability of the local weather, it can snow. In summer, dense fogs are frequent on the coast.