Water temperature on the beaches of Greece

Most popular locations in Greece over the past week

Conditions of sea water on beaches in Greece

Now in beaches in Greece, the water temperature is on the line of comfort. There are locations with cool water, there are places with more or less comfortable water.

The water temperature in Greece tends to decrease, its value has decreased both over the last 10 days and over the month.

Today the warmest water in Greece is recorded in Ixia. Its value in this location is 70°F. And the coldest one is in Paralia Mesis, its value 61°F.

For the two most popular locations for swimming in Greece, the graphs of changes in the average water temperature throughout the year are as follows: 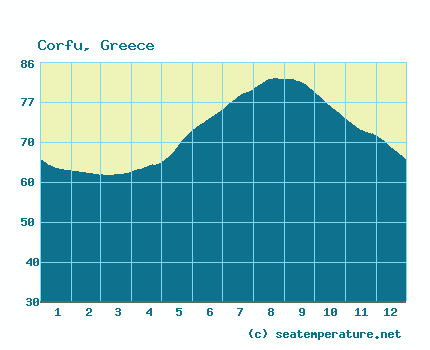 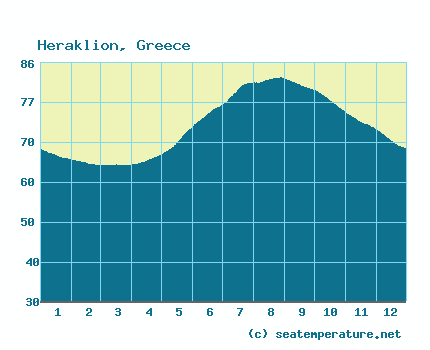 We process, analyze and store data for every beach and city in Greece. Below is a table with current weather data and trends in some places of the country.

Greece is located in Europe. The country is washed by five seas, such as the Ionian Sea, the Cretan Sea, the Mediterranean Sea, the Thracian Sea, the Aegean Sea. Greece is a large resort country and has a long coastline. To determine the temperature of the water in it, we track 247 settlements and resorts.

In most of the country, a subtropical Mediterranean climate prevails. However, due to the wide variety of natural conditions, three large climatic zones and many smaller ones can be distinguished here. Northern Macedonia, northern Epirus, part of Thessaly and the mountainous regions of Pinda lie in a zone of temperate mountain climate, close in its characteristics to the Alpine. Summer is hot and dry (average July temperature is + 28 ° С), and winter is cold (in January the air often stands up to -8 ° С) and wet. Attica, the central and eastern Peloponnese, the Cyclades, Dodecanese and Crete lie in a typical Mediterranean climate. Summer is dry and hot, the temperature in July-August fluctuates around the mark of + 25-28°C, but often rises to + 40-45°C. Strong northerly winds of the Meltemia (Meltemi) slightly reduce the temperature,but they cannot bring precipitation, therefore years are not rare here, when not a drop of rain falls all summer. Winter is mild (January - + 4-12°C) and wet. November - February are the wettest months of the year, but they also often have quite sharp (down to -2-4°C) temperature drops - sometimes even snow falls on the slopes of Pinda, in the mountains of Euboea and Crete. Precipitation in the lowland areas falls from 400-700 mm per year, in the mountains - up to 1500 mm, and the western slopes of Pinda receive almost twice as much rain as the eastern. The northeastern Aegean islands, Halkidiki and the island of Thassos lie in the transition zone - both cold winters and withering-hot summer periods are not uncommon. Even Crete - the largest and southern of the Greek islands - has several climatic regions: the southern coast is always hotter than the northern,and mountainous areas differ markedly in weather conditions from the coast.