Water temperature on the beaches of Gibraltar

Most popular locations in Gibraltar over the past week

Conditions of sea water on beaches in Gibraltar

Now in beaches in Gibraltar, the water temperature is on the line of comfort. There are locations with cool water, there are places with more or less comfortable water.

The water temperature in Gibraltar tends to decrease, its value has decreased both over the last 10 days and over the month.

For the two most popular locations for swimming in Gibraltar, the graphs of changes in the average water temperature throughout the year are as follows: 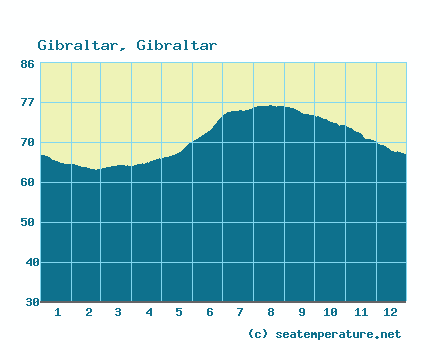 We process, analyze and store data for every beach and city in Gibraltar. Below is a table with current weather data and trends in some places of the country.

Gibraltar is located in Europe. The country is washed by the Strait of Gibraltar. Gibraltar is a small country. To determine the temperature of the water in it, we monitor only one locality.

Mediterranean, with cool, humid winters and dry, hot summers. A distinctive feature of the local climate are rather sharp changes in temperature depending on the time of year, which is uncharacteristic of the Mediterranean. Even in summer, the difference in air temperature between daytime and nighttime hours can reach 8-11 degrees, in winter the temperature fluctuates in slightly smaller sizes, but also quite significantly - 6-8 o C. And at the same time, the weather conditions over the peninsula are quite pleasant - on average, there are about 300 sunny days per year here, and the amount of precipitation is small and directly depends on the weather in the surrounding areas and on the direction of the wind. The last parameter is determined by two clearly predominant winds - the east or south-east wind “Levante«it brings hot and dry air from the Sahara desert in Africa, and the western «polenta» , or «poniente» - precipitation and a slight drop in temperature. Summer is usually very hot and sunny, in July-August, when the southerly wind blows regularly, the air temperature can rise to +32 C and higher with an average air temperature in the range + 28-30 o C. Winter is cool - in January-February the thermometer often drops to + 8-10 o C, at an average temperature of about +14 o C. However, during this period there are also very warm days when the air warms up to + 16-18 oC, however, frequent rains during this period reduce the general temperature background. Precipitation falls from 400 to 900 mm per year, and in different years their amount can vary greatly. Maximum rain falls in autumn and winter, when western and northwestern winds dominate over the territory of Gibraltar.