Water temperature on the beaches of Ghana

Most popular locations in Ghana over the past week

Conditions of sea water on beaches in Ghana

Now in all beaches in Ghana, the water is very warm and comfortable for swimming.

The water temperature in Ghana tends to decrease, its value has decreased both over the last 10 days and over the month.

Today the warmest water in Ghana is recorded in Sekondi Takoradi. Its value in this location is 82°F. And the coldest one is in Tema, its value 78°F.

For the two most popular locations for swimming in Ghana, the graphs of changes in the average water temperature throughout the year are as follows: 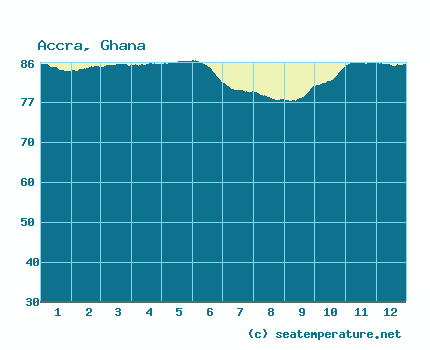 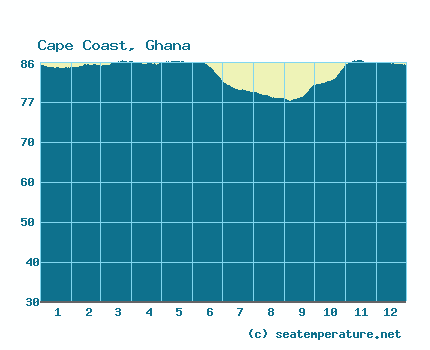 We process, analyze and store data for every beach and city in Ghana. Below is a table with current weather data and trends in some places of the country.

Ghana is located in Africa. The country is washed by the Gulf of Guinea. Ghana is a small country. To determine the temperature of the water in it, we track only five settlements.

Equatorial monsoon, in the south-west of the country - transitional to equatorial. The extended territory contributes to the formation of quite noticeable differences between the climatic conditions in the north and south of the country. The average monthly temperature in summer is from +26 C in the south to +32 C in the north, in winter - + 22-24 C and +30 C, respectively. Moreover, the highest temperature in the southern regions falls, oddly enough, from April to June (from +27 C to +35 C in the shade). In January-February, the Harmattan blows, a dry, dusty wind from the north, although its influence is almost not felt in the coastal regions of the country. Precipitation in the north of the country falls from 1000 mm per year, and in the south-west - up to 2000 mm. There are two main rainy seasons - from April to June and from September to October. However, the general distribution of precipitation throughout the country is uneven - coastal areas (including Accra) receive up to 1700 mm of rain per year in two periods - from April to June, and in October. At the same time, up to 1300 mm of precipitation falls in the interior of Volta, and May and October are considered the wettest. At the same time, in the northern regions affected by dry air masses from the Sahara, the rainy season lasts from May to September. At the same time, a short-term rainfall regime is characteristic of the whole territory of Ghana - rains quickly begin and end quickly even in the rainy season. However, the amount of water that has fallen in one such rain can reach 100 mm.