Water temperature on the beaches of Georgia

Most popular locations in Georgia over the past week

Conditions of sea water on beaches in Georgia

Now the water temperature in the beaches in Georgia is cool. Swimming in this water can be uncomfortable.

The water temperature in Georgia tends to decrease, its value has decreased both over the last 10 days and over the month.

Today the warmest water in Georgia is recorded in Chakvi. Its value in this location is 58°F. And the coldest one is in Poti, its value 57°F.

For the two most popular locations for swimming in Georgia, the graphs of changes in the average water temperature throughout the year are as follows: 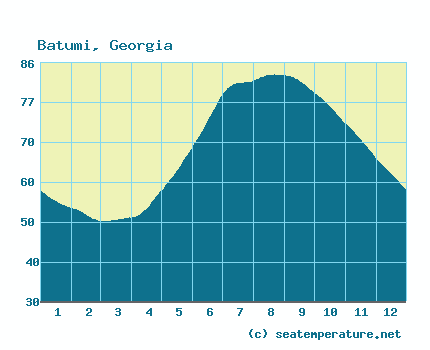 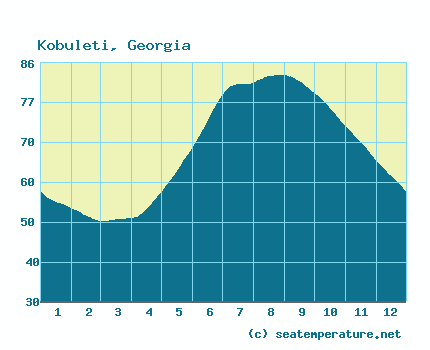 We process, analyze and store data for every beach and city in Georgia. Below is a table with current weather data and trends in some places of the country.

Georgia is located in Europe. The country is washed by the Black Sea. Georgia - has a fairly long coastline. To determine the temperature of the water in it, we track 11 settlements and resorts.

In the west, subtropical, in the east - transitional from subtropical to moderate. Throughout the country, the climatic situation is complicated by the influence of mountains, but since most of the ridges go from west to east, even in the most remote areas the influence of warm Black Sea air masses is noticeable. Average January temperatures range from + 3-9 C in the Colchis Lowland and in Adzharia, to -2 C in the Iberian Depression. In the mountainous regions of Svaneti and Javakheti, the temperature in winter can drop to -16-20 o C. Summer is hot and long - the average August temperature in almost the entire territory of the country is from +23 C to +26 oC. Precipitation falls fairly evenly throughout the year with small highs in the fall and winter. In Imereti and Adjara, from 1000 to 2800 mm fall annually. precipitation in Kakheti and Javakheti - 300-600 mm. In mountainous areas, snow falls in November and stays stable until March-April.