Water temperature on the beaches of French Polynesia

Most popular locations in French Polynesia over the past week

Conditions of sea water on beaches in French Polynesia

Now in all beaches in French Polynesia, the water temperature is quite comfortable, and in some places it is very warm and even hot.

The water temperature in French Polynesia has increased both over the past 10 days and over a month.

Today the warmest water in French Polynesia is recorded in Raiatea. Its value in this location is 81°F. And the coldest one is in Rapa Iti, its value 75°F.

For the two most popular locations for swimming in French Polynesia, the graphs of changes in the average water temperature throughout the year are as follows: 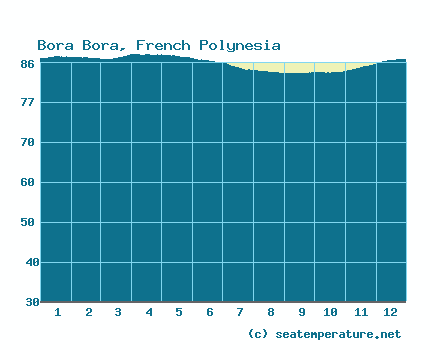 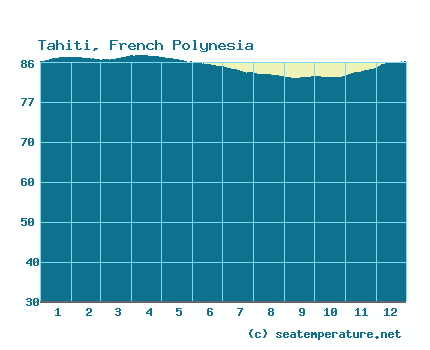 We process, analyze and store data for every beach and city in French Polynesia. Below is a table with current weather data and trends in some places of the country.

French Polynesia is located in Australia and Oceania. The country is washed by the Pacific Ocean. French Polynesia - has a fairly long coastline. To determine the temperature of the water in it, we track 14 settlements and resorts.

Tropical marine. The average annual temperature fluctuates around the mark of +26 o C, and at any time of the day, any day of the year, the temperature range falls within the range from +20 C to +30 o C. Conditionally distinguish 2 seasons - warm and humid (November - May) and cool and dry (June - October). Moreover, the differences between these seasons are quite insignificant. The temperature during the wet season ranges from +27 C to +30 oC. Humidity is very high (about 92%) and precipitation falls to 1700 mm (75% of the annual norm). Precipitation at this time falls mainly in the form of powerful but short-term evening showers, or prolonged drizzling rains lasting up to several days. In the same period, tropical hurricanes and powerful storms are not uncommon. In the dry season, the average air temperature is +25 o C, but much less rain falls - not more than 300 mm. During this period, strong winds from the ocean are frequent at a speed of 40-60 km / h - northeastern “toerau» (May-June) and southeastern “maraamue» (almost the entire season). In the period from June to September in the evenings it is cool, the temperature can drop to +17 o C.