Water temperature on the beaches of Fiji

Most popular locations in Fiji over the past week

Conditions of sea water on beaches in Fiji

Now in all beaches in Fiji, the water is very warm and comfortable for swimming.

The water temperature in Fiji has increased both over the past 10 days and over a month.

Today the warmest water in Fiji is recorded in Nadi. Its value in this location is 86°F. And the coldest one is in Savusavu, its value 83°F.

For the two most popular locations for swimming in Fiji, the graphs of changes in the average water temperature throughout the year are as follows: 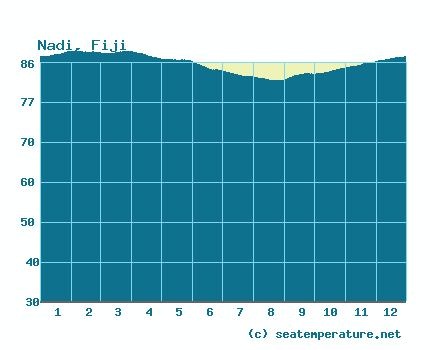 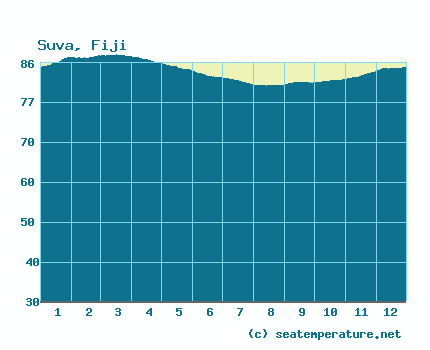 We process, analyze and store data for every beach and city in Fiji. Below is a table with current weather data and trends in some places of the country.

Fiji is located in Australia and Oceania. The country is washed by the Sea of Fiji. Fiji is a small country. To determine the temperature of the water in it, we track a total of eight settlements or resorts.

Tropical marine, hot and humid. Southeastern trade winds in winter, that is, from May to October-November, bring sunny and dry weather to the islands. The air temperature over the central islands in this period varies from +18 C to +26 oC. Between December and April, the air temperature rises markedly (+ 28-32 C), however, the rainy season begins, characterized by heavy tropical showers. The mountain ranges of large islands cause a difference in the amount of precipitation between the windward and leeward slopes. On the windward (eastern) side, from 3000 to 6000 mm of precipitation is observed per year, while on the leeward side, from 1700 to 3500 mm. Small islands receive varying amounts of rainfall, according to their location and size; usually from 1500 to 3500 mm per year. The maximum rainfall on all islands falls between November and January. At the same time, powerful tropical cyclones pass over the territory of the country, bringing strong winds, storms and heavy rainfall.