Water temperature on the beaches of Equatorial Guinea

Most popular locations in Equatorial Guinea over the past week

Conditions of sea water on beaches in Equatorial Guinea

Now in all beaches in Equatorial Guinea, the water is very warm and comfortable for swimming.

The water temperature in Equatorial Guinea has dropped over the past 10 days, but increased compared to 30 days ago.

Today the warmest water in Equatorial Guinea is recorded in Luba. Its value in this location is 83°F. And the coldest one is in Bata, its value 80°F.

For the two most popular locations for swimming in Equatorial Guinea, the graphs of changes in the average water temperature throughout the year are as follows: 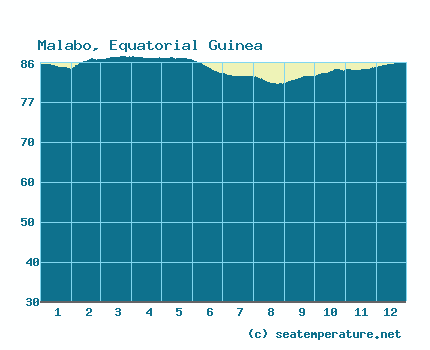 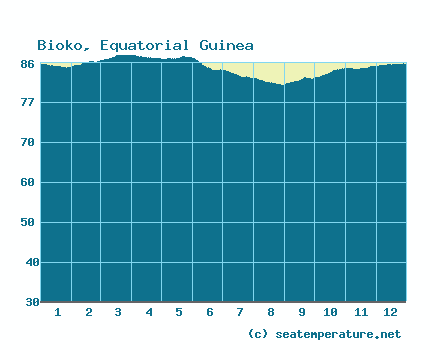 We process, analyze and store data for every beach and city in Equatorial Guinea. Below is a table with current weather data and trends in some places of the country.

Equatorial, hot and constantly humid. The average annual temperature is from +24 C to +28 C in different areas, precipitation is up to 2000 mm. per year, rainy days per year - up to 160. On the Bioko Islands, the rainy season lasts from July to January, while on the mainland there is much less rainfall - maximum from April to May and from October to December. Relatively drier months are May – September and December – January. On the coast of the island of Macias Nguema Biyogo, in the highlands, the average annual temperature is lower - up to +18 o C, and the amount of precipitation increases to 2500-4000 mm. in year. In the highlands it is even colder.