Water temperature on the beaches of Egypt

Most popular locations in Egypt over the past week

Conditions of sea water on beaches in Egypt

Now in the beaches in Egypt, the water temperature ranges from cool to comfortable and warm.

The water temperature in Egypt tends to decrease, its value has decreased both over the last 10 days and over the month.

Today the warmest water in Egypt is recorded in Halayeb. Its value in this location is 82°F. And the coldest one is in Sidi Barrani, its value 69°F.

For the two most popular locations for swimming in Egypt, the graphs of changes in the average water temperature throughout the year are as follows: 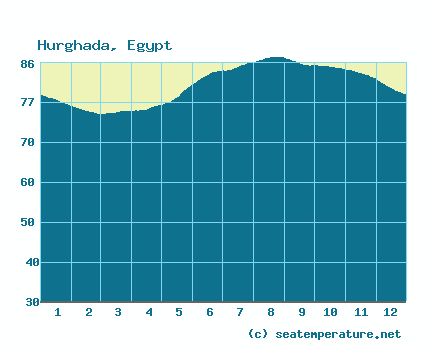 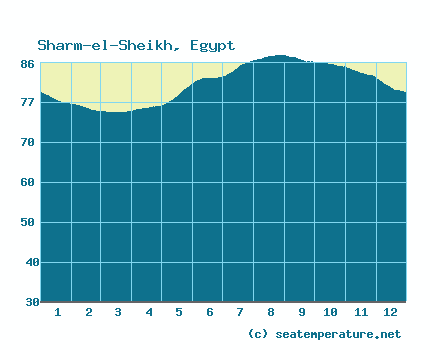 We process, analyze and store data for every beach and city in Egypt. Below is a table with current weather data and trends in some places of the country.

Egypt is in Africa. The country is washed by two seas, such as the Mediterranean Sea and the Red Sea. Egypt - has a fairly long coastline. To determine the temperature of the water in it, we track 24 settlements and resorts.

Hot tropical (south and Red Sea) and subtropical (Mediterranean coast) continental. In summer (May-September) the air temperature is + 35-40ºС, in winter (December-February) + 20-25ºС. The coldest month is January. The whole territory of Egypt is characterized by large daily fluctuations in air temperature - in January-February during the day the thermometer can rise to + 29ºС, and at night it can drop to 0ºС and even lower (the latter is typical for desert regions). In Hurghada, the average January temperature in the daytime is around + 21°C, the night temperature can drop to + 11°C, in June + 35°C and + 24°C, respectively. In Sharm el-Sheikh in the wintertime around + 21ºС, at night –13ºС, in summer + 37ºС and + 26ºС. Cairo in January is cool by local standards - during the day about + 18ºС, at night + 9ºС, in the summer –34ºС and 20ºС respectively. At the same time, there is very little rainfall - not more than 200 mm per year, in most parts of the country there are periods of 2-3 years when there is no rain at all. In the winter and spring periods, dry hamsin hot winds often blow, the temperature during this period can increase to + 40-45°C, and the humidity drops to 10% or lower. Strong sandstorms periodically occur. The average water temperature in February is about + 25ºС in the Red Sea and about + 18ºС - in the Mediterranean. Moreover, in the coastal regions of the southeast in summer, water can warm up to very uncomfortable temperatures - up to + 34ºС and higher.