Water temperature on the beaches of Ecuador

Most popular locations in Ecuador over the past week

Conditions of sea water on beaches in Ecuador

Now in the beaches in Ecuador, the water temperature ranges from cool to comfortable and warm.

The water temperature in Ecuador has increased both over the past 10 days and over a month.

Today the warmest water in Ecuador is recorded in Muisne. Its value in this location is 77°F. And the coldest one is in Santa Cruz, its value 70°F.

For the two most popular locations for swimming in Ecuador, the graphs of changes in the average water temperature throughout the year are as follows: 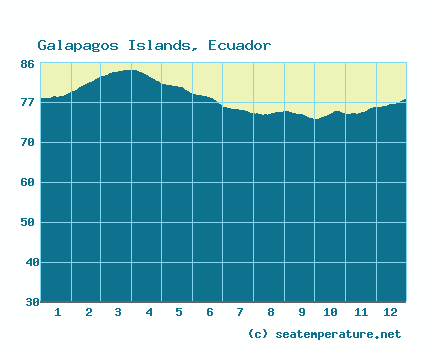 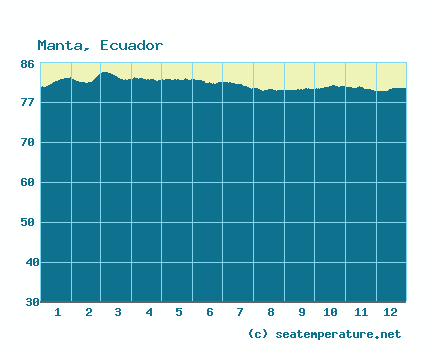 We process, analyze and store data for every beach and city in Ecuador. Below is a table with current weather data and trends in some places of the country.

Ecuador is located in South America. The country is washed by the Pacific Ocean. Ecuador - has a fairly long coastline. To determine the temperature of the water in it, we track 14 settlements and resorts.

The climate is equatorial and mountain-equatorial, in the south - subequatorial. The overall picture of the country's climatic conditions is extremely heterogeneous - in fact, you can observe a huge variety of microclimatic zones associated with the peculiarities of the local relief - even the neighboring sections of the valley can radically differ from each other in weather due to different topography. The characteristic features of the local climate also include the rapid change in local weather during the day, which is associated with various heating of the mountain slopes under the influence of sunlight, changing their azimuth during the day. Ecuadorians even say «we have four seasons in one day.» With a certain degree of conventionality, two seasons can be distinguished in Ecuador - wet hot and dry cool.Monthly average temperatures in the summer in Quito range from +18 to +25 o C, in winter - from -3 to +13 o C. Precipitation is about 600 mm. per year, with a marked decrease in the level from August to February. The central plains are famous for a fairly uniform climate - all year round here from +17 to +24 o C, precipitation is not more than 300 mm, mainly in the off-season and in autumn. In the southern part of Costa, summer temperatures fluctuate around the mark of +23 o C, winter - about +19 o C. Moreover, no more than 200 mm of rain falls in the year. In Orient, the average annual temperature is + 30-35 oC, while there is a huge amount of precipitation here - from 5,000 mm on the eastern slopes of the Andes to 4,500 in the lowlands (July and August are the wettest months, from September to December the amount of precipitation decreases markedly). The weather in the Galapagos Islands is largely determined by the nature of the ocean currents and winds. The usual cold Humboldt Current from June to December creates a powerful inversion of air, forming a cool damp fog, which the locals call “Garua». During this period, the weather is cool and dry, the average monthly rainfall does not exceed 10 mm). In December, powerful northern trade winds usually bring warm and rainy weather (up to 300 mm of rain), which lasts until April - May).