Water temperature on the beaches of East Timor

Most popular locations in East Timor over the past week

Conditions of sea water on beaches in East Timor

Now in all beaches in East Timor, the water is very warm and comfortable for swimming.

The water temperature in East Timor tends to decrease, its value has decreased both over the last 10 days and over the month.

For the two most popular locations for swimming in East Timor, the graphs of changes in the average water temperature throughout the year are as follows: 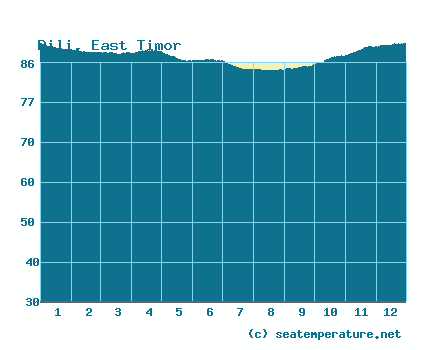 We process, analyze and store data for every beach and city in East Timor. Below is a table with current weather data and trends in some places of the country.

Timor Leste is located in Asia. The country is washed by the Sea Banda. Timor Leste is a small country. To determine the temperature of the water in it, we monitor only one locality.

The climate is transitional from equatorial to subequatorial, monsoon, hot and very humid. The average monthly temperature fluctuates around the mark of + 25-27°C, while the maximum daily temperature at sea level can reach + 38°C (the hottest months are October and November). However, in mountainous areas the temperature drops quickly and during the day at an altitude of more than a thousand meters it rarely reaches more than + 24°C, and at night it often drops to + 12°C. Precipitation is up to 1500 mm per year at sea level and up to 2500 mm in the mountains. The maximum amount of rain falls during the period of the northwest monsoons (from November to May), when almost continuous rains occur over the island, leading to river spills, roads become impassable. From June to November, when the southeastern monsoon blows, bringing dry “breath» of the Australian mainland, there is very little rainfall.