Water temperature on the beaches of Cyprus

Most popular locations in Cyprus over the past week

Conditions of sea water on beaches in Cyprus

Now in the beaches in Cyprus, the water temperature ranges from cool to comfortable and warm.

The water temperature in Cyprus tends to decrease, its value has decreased both over the last 10 days and over the month.

Today the warmest water in Cyprus is recorded in Polis Latchi. Its value in this location is 71°F. And the coldest one is in Nissi beach, its value 69°F.

For the two most popular locations for swimming in Cyprus, the graphs of changes in the average water temperature throughout the year are as follows: 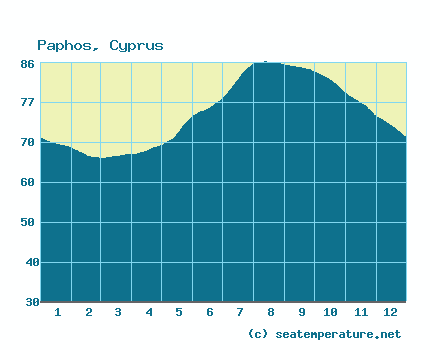 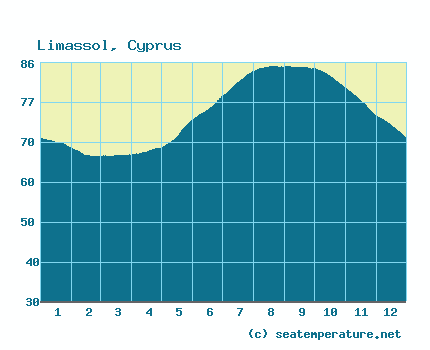 We process, analyze and store data for every beach and city in Cyprus. Below is a table with current weather data and trends in some places of the country.

Cyprus is located in Europe. The country is washed by the Mediterranean Sea. Cyprus - has a fairly long coastline. To determine the temperature of the water in it, we track 16 settlements and resorts.

The climate of Cyprus is subtropical Mediterranean, warm and even throughout the year. Winter is very short and mild. The average summer temperature is from + 25 ° С to + 35 ° С; over 320 sunny days a year are recorded here. Rains are extremely rare in Cyprus, there are droughts. In winter, the temperature ranges from + 17°C to + 19°C, in the highlands the thermometer column often drops several degrees below zero and snow falls. Most of the precipitation falls precisely from December to February. The average sea water temperature off the coast of Cyprus in July is + 23°C, in February - + 14°C, so the swimming season is open almost all year round.