Water temperature on the beaches of Curacao

Most popular locations in Curacao over the past week

Conditions of sea water on beaches in Curacao

Now in all beaches in Curacao, the water is very warm and comfortable for swimming.

The water temperature in Curacao tends to decrease, its value has decreased both over the last 10 days and over the month.

Today the warmest water in Curacao is recorded in Labadera. Its value in this location is 81°F. And the coldest one is in Jan Thiel, its value 79°F.

For the two most popular locations for swimming in Curacao, the graphs of changes in the average water temperature throughout the year are as follows: 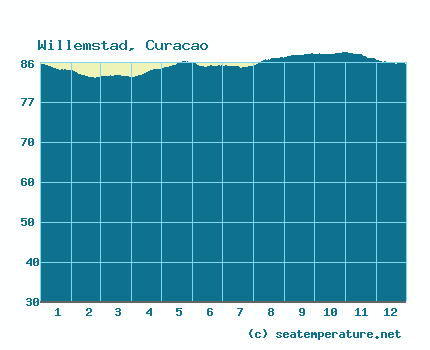 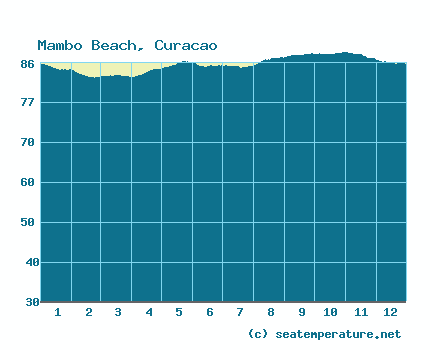 We process, analyze and store data for every beach and city in Curacao. Below is a table with current weather data and trends in some places of the country.

Curacao is located in Central America. The country is washed by the Caribbean Sea. Curacao is a small country. To determine the temperature of the water in it, we track only two settlements.

Tropical marine, trade wind. Most of the year there is warm and comfortable weather with a minimum temperature difference between the seasons. The average temperature in summer (June - September) is about + 27°C, in winter (December - February) - + 25°C, while the daily temperature drops are extremely small - the thermometer at night rarely drops below +20 C even in winter. The northeastern trade winds blowing from the Atlantic Ocean bring frequent and heavy rains. The amount of precipitation varies from 280 mm on the western shores to 1000 mm on the northeastern slopes of the coastal hills. The average annual rainfall in Curacao is about 500 mm (the maximum falls on the period from May to October-November). Relative humidity is fairly constant throughout the year, averaging 76%.Curacao is located south of the «Caribbean hurricane belt» and is hardly affected by the elements. However, almost constantly blowing east winds make some areas of the north and north-east coast quite uncomfortable.