Water temperature on the beaches of Cuba

Most popular locations in Cuba over the past week

Conditions of sea water on beaches in Cuba

Now in all beaches in Cuba, the water is very warm and comfortable for swimming.

The water temperature in Cuba tends to decrease, its value has decreased both over the last 10 days and over the month.

Today the warmest water in Cuba is recorded in Cienfuegos. Its value in this location is 84°F. And the coldest one is in Varadero, its value 79°F.

For the two most popular locations for swimming in Cuba, the graphs of changes in the average water temperature throughout the year are as follows: 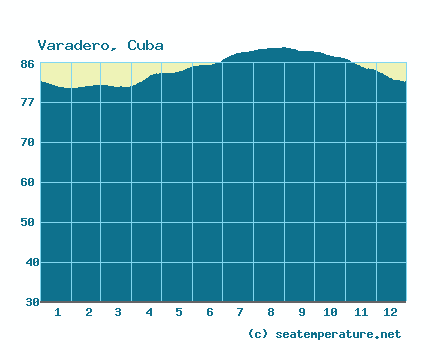 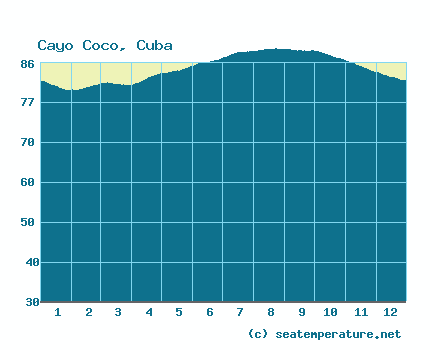 We process, analyze and store data for every beach and city in Cuba. Below is a table with current weather data and trends in some places of the country.

Cuba is located in Central America. The country is washed by two seas, such as the Caribbean Sea, the Gulf of Mexico. Cuba - has a fairly long coastline. To determine the temperature of the water in it, we track 31 settlements and resorts.

The climate in Cuba is tropical trade wind. The average air temperature in January is + 19-21 ° С, in July - + 30-35 ° С, the average annual temperature is kept at + 26 ° С. Throughout the year, high humidity is observed, which in combination with high temperature requires a certain acclimatization, but on the coast the heat is often tempered by constant winds. Precipitation is up to 1500 mm per year, fairly evenly distributed throughout the seasons. The rainy season in Cuba lasts from May to August-October, the dry season from September-November to April, but there are frequent changes in the weather, when there is heavy tropical rain in the dry season and dry and sunny weather in the rainy season. The average annual water temperature off the coast of Cuba does not fall below + 24°C.