All data are in degrees Celsius. Switch to Fahrenheit
Europe > Ukraine

Water temperature on the beaches of Crimea

Most popular locations in Crimea over the past week

Conditions of sea water on beaches in Crimea

Now in the beaches in Crimea, the water temperature is very low and not suitable for swimming.

The water temperature in Crimea tends to decrease, its value has decreased both over the last 10 days and over the month.

Today the warmest water in Crimea is recorded in Foros. Its value in this location is 54°F. And the coldest one is in Yurkino, its value 44°F.

For the two most popular locations for swimming in Crimea, the graphs of changes in the average water temperature throughout the year are as follows: 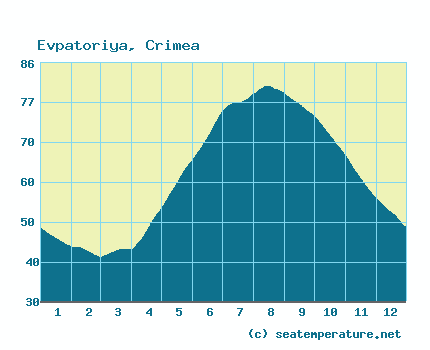 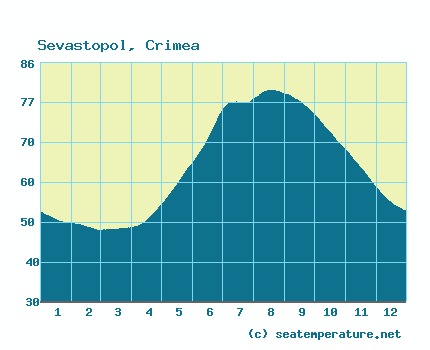 We process, analyze and store data for every beach and city in Crimea. Below is a table with current weather data and trends in some places of the country.

Crimea is washed by two seas, such as the Black Sea and the Sea of Azov. Crimea is a large resort territory and has a long coastline. To determine the water temperature in the Crimea, we track 136 settlements and resorts.

Weather in Crimea directly depends on the climatic zone of the peninsula. So, in the lowland part of Crimea, a temperate continental climate with hot and arid summers and short and snowy winters, sometimes giving surprises in the form of severe frosts. The average air temperature in this region during the summer months is +22 ... + 23 ° С, maximum - about + 40°C. The most popular part of Crimea among tourists is the southern one, whose climate is similar to the Mediterranean. Provides such weather conditions, the ice-free Black Sea and the protection of the region by the Crimean Mountains from the north. So, the mountains come easily from the south with warm air, but they impede the dense and cold, due to which the resort climate of the South Coast is achieved. The average summer temperature here is + 28°C, which, however, is slightly softened by sea breezes.The average air temperature in the winter in the south of Crimea is about +1 ... + 5 ° С.