Water temperature on the beaches of Costa Rica

Most popular locations in Costa Rica over the past week

Conditions of sea water on beaches in Costa Rica

Now in all beaches in Costa Rica, the water is very warm and comfortable for swimming.

The water temperature in Costa Rica tends to decrease, its value has decreased both over the last 10 days and over the month.

Today the warmest water in Costa Rica is recorded in Cahuita. Its value in this location is 83°F. And the coldest one is in Playa Naranjo, its value 79°F.

For the two most popular locations for swimming in Costa Rica, the graphs of changes in the average water temperature throughout the year are as follows: 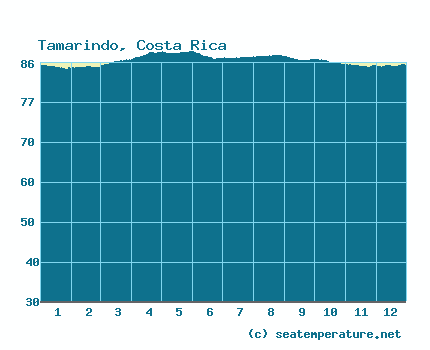 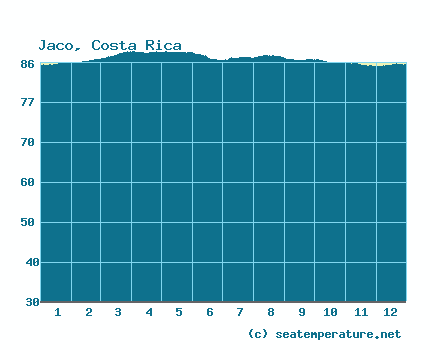 We process, analyze and store data for every beach and city in Costa Rica. Below is a table with current weather data and trends in some places of the country.

Costa Rica is located in Central America. The country is washed by two seas, such as the Caribbean, the Pacific Ocean. Costa Rica - has a fairly long coastline. To determine the temperature of the water in it, we track 13 settlements and resorts.

Subequatorial. On the plateau, the average temperature throughout the year is at +22 o C, in mountainous areas it can drop to +10 (in winter, night frosts can reach -5 C). In low-lying places, on the Caribbean Sea and in the south of the Pacific coast, daytime temperatures range from +27 C to +33 C all year round. At night it is slightly cooler than during the day. Precipitation falls a lot - from 1000 mm. per year on the Pacific coast, up to 3000-5000 mm. per year on the Caribbean. According to the distribution of precipitation, the country's climatic zones are distinguished. On the Caribbean coast and in the southern Pacific coast, it rains almost constantly from May to November, with a maximum from September to October, with a short dry period from December to April. Moreover, from May to August, relatively little rain. In the central regions of the country is much drier, and the nature of the precipitation depends heavily on the direction of the wind. On the windward slopes of the mountains, up to 5000 mm can fall. precipitation, and intermountain basins receive no more than 1500 mm. rain per year. The northern part of the Pacific coast is the driest part of the country, it rains here mainly in spring and autumn. At any time of the year, nights are usually cloudless, and rain, as scheduled, begins after lunch.