Water temperature on the beaches of Cook Islands

Most popular locations in Cook Islands over the past week

Conditions of sea water on beaches in Cook Islands

Now in all beaches in Cook Islands, the water is very warm and comfortable for swimming.

The water temperature in Cook Islands has increased both over the past 10 days and over a month.

Today the warmest water in Cook Islands is recorded in Aitutaki. Its value in this location is 79°F. And the coldest one is in Avarua, its value 77°F.

For the two most popular locations for swimming in Cook Islands, the graphs of changes in the average water temperature throughout the year are as follows: 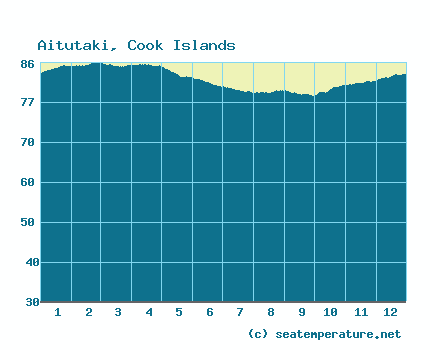 We process, analyze and store data for every beach and city in Cook Islands. Below is a table with current weather data and trends in some places of the country.

Cook Islands are in Australia and Oceania. The country is washed by the Pacific Ocean. Cook Islands is a small country. To determine the temperature of the water on them, we track only three settlements.

Tropical marine, trade wind. Oceanic air masses dominating the archipelago maintain a relatively even temperature regime and high humidity. Seasonal climate changes are small. The hottest month is January (average temperature + 26-29°C), the coolest is July (+ 24-25°C). Due to the relatively small height of the islands above sea level, precipitation is about 600-800 mm per year, only on Rarotong with its more elevated landscape is the rain quite abundant - up to 1100 mm per year. There are two seasons - cool dry (from April to November) and relatively wet and hot (from December to March). The hurricane season lasts from November to March, although due to the natural conditions of the archipelago, serious cyclones are very rare, but recently their number has increased slightly.