Water temperature on the beaches of Congo

Most popular locations in Congo over the past week

Conditions of sea water on beaches in Congo

Now in all beaches in Congo, the water is very warm and comfortable for swimming.

The water temperature in Congo has increased both over the past 10 days and over a month.

Today the warmest water in Congo is recorded in Loandjili. Its value in this location is 78°F. And the coldest one is in Loandjili, its value 78°F.

For the two most popular locations for swimming in Congo, the graphs of changes in the average water temperature throughout the year are as follows: 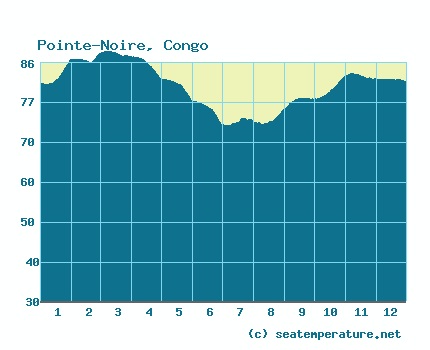 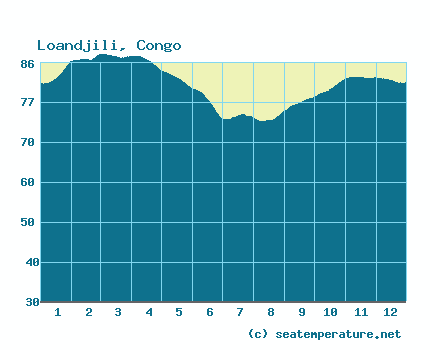 We process, analyze and store data for every beach and city in Congo. Below is a table with current weather data and trends in some places of the country.

Congo is located in Africa. The country is washed by the Atlantic Ocean. Congo is a small country. To determine the temperature of the water in it, we track only two settlements.

In the Democratic Republic of the Congo, the climate is predominantly equatorial, constantly humid. In the southern half and on the northern outskirts - subequatorial. Average air temperatures range from +25 C to +28 o C, daily differences reach 10-15 o C. Two rainy and two dry seasons: “small» dry season - January-March, “small» rainy season - April-May, winter dry season - June-August, rainy season - September-December. Precipitation in the equatorial zone falls 1700–2200 mm. per year, especially heavy rains occur from April to May and from September to November. Equatorial showers during these months are strong, but short-lived (usually in the afternoon). Farther from the equator (south and north) dry periods are more pronounced: in the north - from March to November, in the south - from October – November to March – April. Precipitation is less - up to 1200 mm. It is cooler in the mountains, and more precipitation falls - up to 2500 mm. in year.