Water temperature on the beaches of Comoros

Most popular locations in Comoros over the past week

Conditions of sea water on beaches in Comoros

Now in all beaches in Comoros, the water is very warm and comfortable for swimming.

The water temperature in Comoros has increased both over the past 10 days and over a month.

For the two most popular locations for swimming in Comoros, the graphs of changes in the average water temperature throughout the year are as follows: 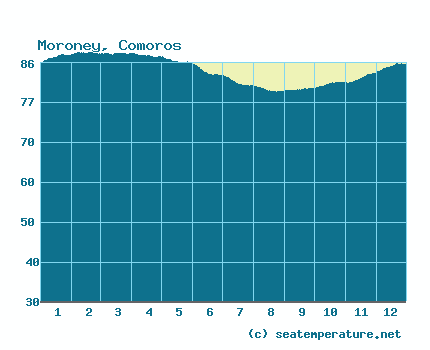 We process, analyze and store data for every beach and city in Comoros. Below is a table with current weather data and trends in some places of the country.

Comoros are in Africa. The country is washed by the Indian Ocean. Comoros is a small country. To determine the temperature of the water in it, we monitor only one locality.

Tropical monsoon, quite hot and humid. Two seasons are quite pronounced here - warmer and wetter summers (from November to April) and relatively cool and dry winters (May-October). Monthly average temperatures range from + 24 C in winter to +27 C in the summer, and almost at any time of the year daytime temperatures are much higher than the +30 o markC. The mountainous regions are cooler, especially at night, which is facilitated by a noticeably greater amount of rainfall in these areas. In general, from 1,100 mm (leeward areas) to 3,000 mm (on the windward slopes of the mountains) rain falls on the territory of the islands over the year, however, in some years up to 5500 mm of rain can fall here. Their maximum occurs during the monsoon season (from November to April-May), when the air humidity reaches 100%, and daily showers bring with them up to 60% of the total annual rainfall. From December to April, powerful tropical cyclones are not uncommon.