Water temperature on the beaches of Colombia

Most popular locations in Colombia over the past week

Conditions of sea water on beaches in Colombia

Now in all beaches in Colombia, the water is very warm and comfortable for swimming.

The water temperature in Colombia tends to decrease, its value has decreased both over the last 10 days and over the month.

Today the warmest water in Colombia is recorded in Puerto Escondido. Its value in this location is 84°F. And the coldest one is in Mosquera, its value 77°F.

For the two most popular locations for swimming in Colombia, the graphs of changes in the average water temperature throughout the year are as follows: 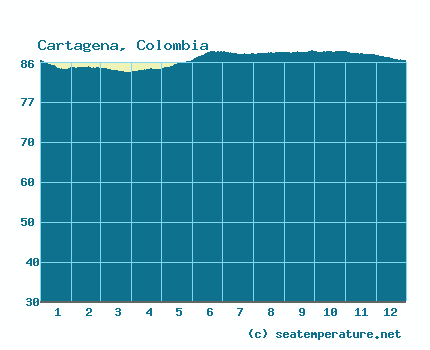 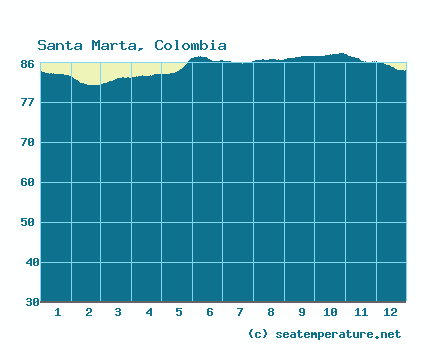 We process, analyze and store data for every beach and city in Colombia. Below is a table with current weather data and trends in some places of the country.

Colombia is located in South America. The country is washed by two seas, such as the Caribbean, the Pacific Ocean. Colombia - has a fairly long coastline. To determine the temperature of the water in it, we track 18 settlements and resorts.

The territory of Colombia is extremely diverse in its climatic features. Equatorial and subequatorial types of climate prevail over most of the country's territory with very small seasonal variations in temperature. In the highlands of Cordillera, the climate is mountainous; in the foothills, climatic indicators are close to tropical (western slopes) and equatorial types. The average monthly temperature in the lowlands and on the coasts of the oceans is about +29 C almost all year round, in the mountainous regions, at altitudes of 2000 - 3000 meters, it fluctuates around +13 C to +16 o C, the temperature reaches higher on the slopes of the Cordillera values ​​of +12 C only in the summer months (May - August), the rest of the time the thermometer column fluctuates around +16 C to +9 o C. Precipitation falls from 150 mm (in the north-east of the country) to 5000 mm (Amazonia) or even 10,000 mm per year (Pacific lowland - one of the wettest places on Earth e), and the nature of rainfall in different regions of the country is markedly different. On the western slopes of the Cordillera, it rains almost every day, and up to 70 mm of rain can fall per day (for comparison, in the central zone of Russia, such rainfall sometimes falls in 1 - 2 months). The rains here are short-lived, but strong and high in water. On the Caribbean coast, rain is relatively rare (on average every 2 to 3 days, the minimum falls on the period from late December to mid-January), and the rainfall itself falls, for the most part, in the form of powerful, but short-term showers. In mountainous regions, the precipitation regime depends on very many factors, therefore it is rather unstable - in some years, the western slopes of the highlands receive tens of times more water than the eastern ones, although in general such a distribution of precipitation is characteristic of all Cordilleras. In Bogota (located at an altitude of 2600 m above sea level), the winter period is quite warm (the temperature in January is about +20 o C, at night it can drop to +11 C) and dry (no more than 600 mm of precipitation). In the summer (March to October) it is relatively cool (+16 C) and rainy (up to 3700 mm per year, maximum in June - July). In late summer, frosts are frequent in the surrounding mountains, and in August - hurricane winds. The water temperature off the Caribbean coast is from +20 C to +26 C all year round. Pacific waters are cooler, but not by much - the average temperature here is from +18 C to +25 C, depending on the region.