Water temperature on the beaches of Christmas Island

Most popular locations in Christmas Island over the past week

Conditions of sea water on beaches in Christmas Island

Now in all beaches in Christmas Island, the water is very warm and comfortable for swimming.

The water temperature in Christmas Island has increased both over the past 10 days and over a month.

For the two most popular locations for swimming in Christmas Island, the graphs of changes in the average water temperature throughout the year are as follows: 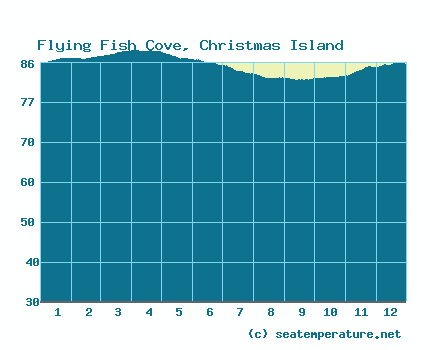 We process, analyze and store data for every beach and city in Christmas Island. Below is a table with current weather data and trends in some places of the country.

An island of volcanic origin. The highest point is 361 m above sea level. The climate of the island is tropical. The average annual temperature is about 27°C. The amount of precipitation is quite large - about 2000 mm per year. There are several small rivers on the island, so the population is provided with drinking water.