Water temperature on the beaches of Chile

Most popular locations in Chile over the past week

Conditions of sea water on beaches in Chile

Now in the beaches in Chile, the water temperature has different values. There are very cold locations, there are cool places, and there are resorts with warm and comfortable water.

The water temperature in Chile has increased both over the past 10 days and over a month.

Today the warmest water in Chile is recorded in Easter Island. Its value in this location is 72°F. And the coldest one is in Puerto Williams, its value 44°F.

For the two most popular locations for swimming in Chile, the graphs of changes in the average water temperature throughout the year are as follows: 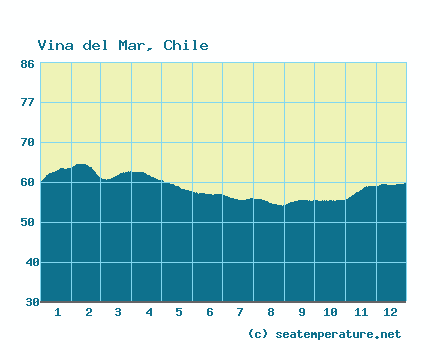 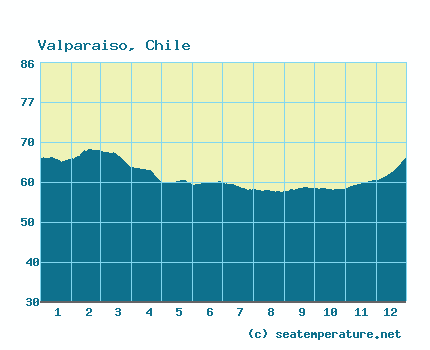 We process, analyze and store data for every beach and city in Chile. Below is a table with current weather data and trends in some places of the country.

Chile is located in South America. The country is washed by the Pacific Ocean. Chile - has a fairly long coastline. To determine the water temperature in it, we track 36 settlements and resorts.

The climate of the country is extremely diverse, due to its large length from north to south, an abundance of powerful coastal currents and the influence of the Andes mountain system. In the north of the country, a tropical desert type of climate prevails. Monthly average temperatures here range from +12 C in winter (May-August) to +22 C in summer (December-March) with maximum temperatures in the region of +38 o C. Precipitation is not more than 50 mm. per year, and in some areas of Atakama there is no rain at all. A little to the south, the climate changes to subtropical, with summer temperatures ranging from + 22-24, winter - + 12-18 C and precipitation mainly in winter (up to 1000 mm.). The same climatic regime on the islands of Easter and Juan Fernandez. The middle part of the country is dominated by a temperate oceanic type of climate. The temperature here ranges from + 3-12 in the winter to +22 C in the summer. In this case, precipitation falls from 100 to 800 mm. per year, mainly in winter. On mountain slopes, to an altitude of 1 thousand meters above sea level, the amount of precipitation can reach up to 2500 mm. in year. Alpine regions of the country differ from the coastal plain in lower temperatures (in some areas it does not exceed +3 o C even in summer, but drops to -27 C in winter) and an insignificant amount of precipitation. In the zone of the Strait of Magellan and on the island of Tierra del Fuego, the climate is polar, the temperature in winter ranges from -16 to -4, and in summer it does not exceed +18 o C. Strong winds and low rainfall give this area an arid character. At the same time, up to 3000 mm can fall on the mountain slopes of the northern part of the region. precipitation per year.