Water temperature on the beaches of Cameroon

Most popular locations in Cameroon over the past week

Conditions of sea water on beaches in Cameroon

Now in all beaches in Cameroon, the water is very warm and comfortable for swimming.

The water temperature in Cameroon has dropped over the past 10 days, but increased compared to 30 days ago.

Today the warmest water in Cameroon is recorded in Bonaberi. Its value in this location is 83°F. And the coldest one is in Douala, its value 81°F.

For the two most popular locations for swimming in Cameroon, the graphs of changes in the average water temperature throughout the year are as follows: 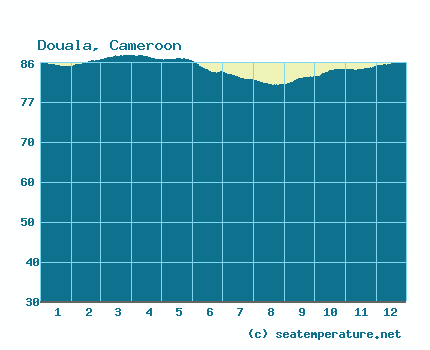 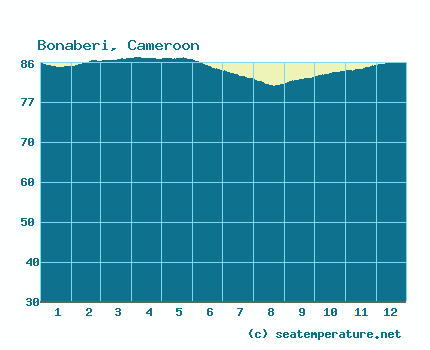 We process, analyze and store data for every beach and city in Cameroon. Below is a table with current weather data and trends in some places of the country.

Cameroon is located in Africa. The country is washed by the Gulf of Guinea. Cameroon is a small country. To determine the temperature of the water in it, we track only three settlements.

In the south - wet equatorial, in the north - arid subequatorial. In the south, monthly average temperatures range from +22 C to +28 o C, and the monsoon brings abundant precipitation to the coast - up to 3000-5000 mm. per year (on the slopes of the Cameroon volcano - up to 10,000 mm.). The dry season is practically absent. On the Cameroon plateau in the interior of the country is slightly cooler (average temperatures + 23-24 C). Precipitation (1500–1700 mm. Per year) falls in two wet seasons - in September – November and April – June. In the north, the influence of the Sahara is felt. Northerly winds bring heat (average monthly temperatures range from +26 C to +33 C), and precipitation is less than 500 mm. per year, the wetter season is from June to September. The best time to visit the country is from November to February.