Water temperature on the beaches of Brazil

Most popular locations in Brazil over the past week

Conditions of sea water on beaches in Brazil

Now in the beaches in Brazil, the water temperature ranges from cool to comfortable and warm.

The water temperature in Brazil has dropped over the past 10 days, but increased compared to 30 days ago.

Today the warmest water in Brazil is recorded in Belem. Its value in this location is 84°F. And the coldest one is in Rondinha, its value 70°F.

For the two most popular locations for swimming in Brazil, the graphs of changes in the average water temperature throughout the year are as follows: 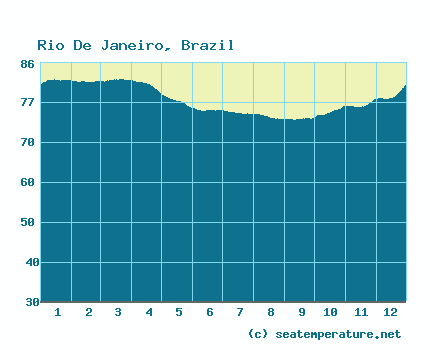 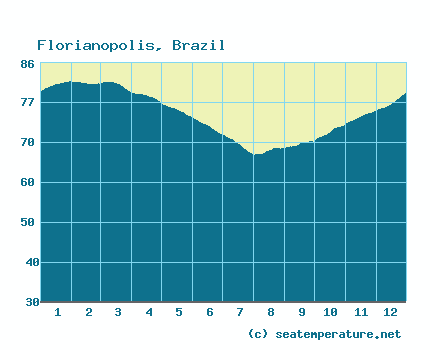 We process, analyze and store data for every beach and city in Brazil. Below is a table with current weather data and trends in some places of the country.

Brazil is located in South America. The country is washed by the Atlantic Ocean. Brazil is a large resort country and has a long coastline. To determine the temperature of the water in it, we track 124 settlements and resorts.

From equatorial to subtropical, it varies greatly depending on the latitude and nature of the area. The average temperature in summer (December-April) is from +23 to 29 o C, in winter (May-November) from +16 to 24 o C. Precipitation falls from 3000 mm. per year in the west of the Amazonian lowlands, as well as in the Central and Eastern regions, up to 500 mm. in the northeast of the Brazilian plateau (in the region of relatively arid plateaus - «sertan») and up to 1200 mm. on South. In September-March in most of the country there is a rainy season, at this time with fairly hot air there is high humidity and heavy rainfall. In Amazonia, heavy rains fall in the period from May to July, from December to April, with a high temperature, precipitation falls somewhat less often (mainly at night), but still brings a large amount of water. The relatively dry season lasts from August to early December. In the Rio de Janeiro region from November to March it is quite hot (up to +30 C) and almost always humid, from April to September the temperature drops to + 17-24 o C, but it still rains often. The best time to visit Rio de Janeiro is from May to August. At this time, the air temperature ranges from 22 to 32 o C, and a light warm breeze blows from the ocean. In mountainous areas in winter, the temperature can drop to 0 o C.