Water temperature on the beaches of Bermuda

Most popular locations in Bermuda over the past week

Conditions of sea water on beaches in Bermuda

Now at all beaches in Bermuda, the water is heated to a comfortable temperature for swimming.

The water temperature in Bermuda tends to decrease, its value has decreased both over the last 10 days and over the month.

Today the warmest water in Bermuda is recorded in Elbow Beach. Its value in this location is 73°F. And the coldest one is in Clearwater Beach Park, its value 72°F.

For the two most popular locations for swimming in Bermuda, the graphs of changes in the average water temperature throughout the year are as follows: 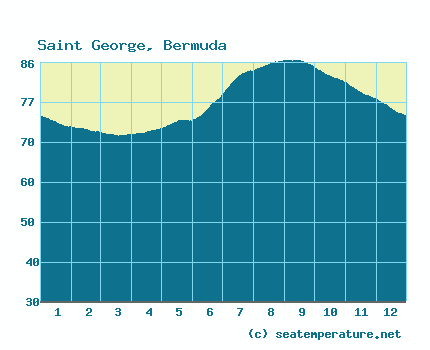 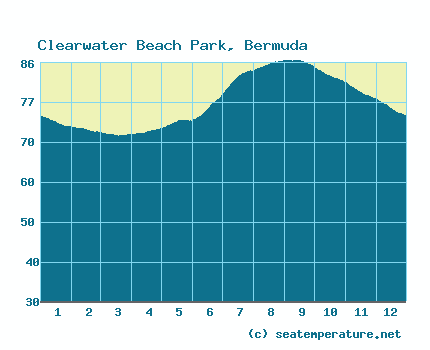 We process, analyze and store data for every beach and city in Bermuda. Below is a table with current weather data and trends in some places of the country.

Bermuda is located in Central America. The country is washed by the Atlantic Ocean. Bermuda is a small country. To determine the temperature of the water on them, we track only two settlements.

Moderate marine. The main weather-forming factor here is the Gulf Stream, which runs between Bermuda and the coast of North America. All year round, warm air masses formed above the Gulf Stream surface maintain warm and relatively even weather over the islands - the average temperature in summer (May-September) is about +26 o C, in winter (mid-December - late March) - about +17 C with minimal values ​​in the region of the mark at +14 o C. For the winter period is characterized by strong north-westerly winds that bring cold and rain. Precipitation is up to 1000 mm, and there is no pronounced rainy season - powerful, but short-term tropical rains are possible at any time of the year. During the passage of hurricanes (from June to November), windy and rainy weather is possible, however, in comparison with other island states of the region, the danger of destructive hurricanes is small - the main «route» of their movement goes much west of Bermuda.