Water temperature on the beaches of Belize

Most popular locations in Belize over the past week

Conditions of sea water on beaches in Belize

Now in all beaches in Belize, the water is very warm and comfortable for swimming.

The water temperature in Belize tends to decrease, its value has decreased both over the last 10 days and over the month.

Today the warmest water in Belize is recorded in Belize City. Its value in this location is 83°F. And the coldest one is in Placencia, its value 81°F.

For the two most popular locations for swimming in Belize, the graphs of changes in the average water temperature throughout the year are as follows: 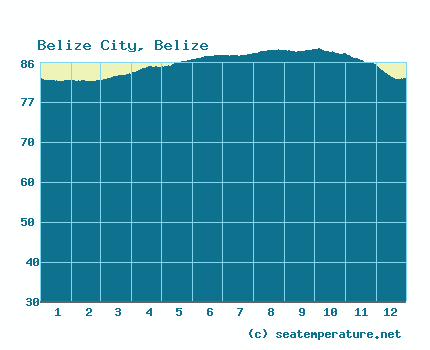 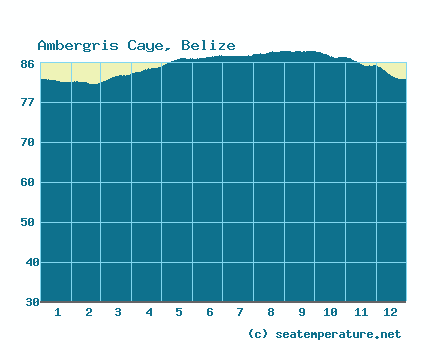 We process, analyze and store data for every beach and city in Belize. Below is a table with current weather data and trends in some places of the country.

Belize is located in Central America. The country is washed by the Caribbean Sea. Belize is a small country. To determine the temperature of the water in it, we monitor only four settlements.

Tropical trade wind. The climatic conditions of Belize are extremely diverse for such a small territory. The average air temperature in summer in the lowlands is about +26 o C, in the mountains about +19 o C. In the winter on the plains about +21 o C, in the mountains up to +17 o C. But the main difference in weather conditions is not air temperature , but in the amount of precipitation. On average, up to 1350 mm of rain (with the “dry season» from November to April) and up to 4000 mm per year in the south fall on average in the northern regions per year, and here the “dry season» is much shorter - about two months. The maximum of rainy days usually falls between June and August, but this pattern does not take into account the influence of mountain ranges. Depending on the height of the place above sea level and the exposure of the slope, the amount of precipitation can vary markedly even between nearby points. From June to November, destructive tropical hurricanes are frequent.