Water temperature on the beaches of Belgium

Most popular locations in Belgium over the past week

Conditions of sea water on beaches in Belgium

Now at the beaches in Belgium, the water temperature is in the discomfort zone. Swimming in such water will not give you much pleasure.

The water temperature in Belgium tends to decrease, its value has decreased both over the last 10 days and over the month.

Today the warmest water in Belgium is recorded in De Panne. Its value in this location is 52°F. And the coldest one is in Zeebrugge, its value 50°F.

For the two most popular locations for swimming in Belgium, the graphs of changes in the average water temperature throughout the year are as follows: 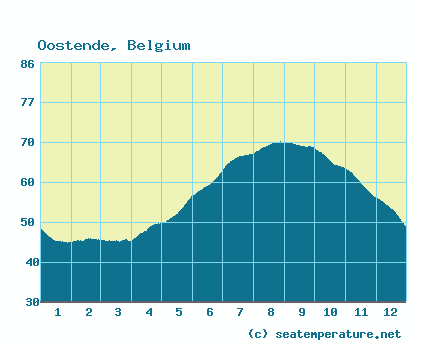 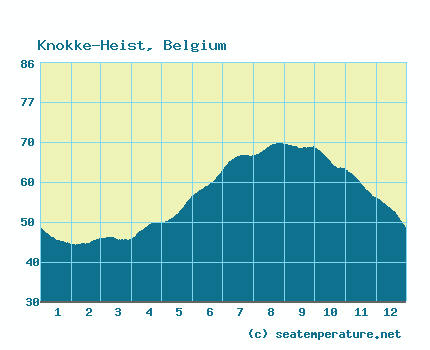 We process, analyze and store data for every beach and city in Belgium. Below is a table with current weather data and trends in some places of the country.

Belgium is located in Europe. The country is washed by the North Sea. Belgium is a small country. To determine the temperature of the water in it, we track only five settlements.

Moderate sea, quite soft. The average annual temperature is about + 12ºС, in January - from + 3ºС on the coast to -1ºС in the Ardennes, in July - 14-18ºС. At the same time, there are often periods when the weather “breaks out» of the seasonal rhythm - in the summer cool, moist winds from the Atlantic often come, bringing prolonged rains and relatively cold weather, and in winter these same sea cyclones bring warmth and dampness. Precipitation falls mainly in the autumn-winter period in the form of rain (from 700-900 mm in the plains to 1200-1500 mm in the mountains). Relative humidity is high enough all year round.