Water temperature on the beaches of Bahrain

Most popular locations in Bahrain over the past week

Conditions of sea water on beaches in Bahrain

Now in all beaches in Bahrain, the water temperature is quite comfortable, and in some places it is very warm and even hot.

The water temperature in Bahrain tends to decrease, its value has decreased both over the last 10 days and over the month.

Today the warmest water in Bahrain is recorded in Jidd Hafs. Its value in this location is 77°F. And the coldest one is in Sitrah, its value 76°F.

For the two most popular locations for swimming in Bahrain, the graphs of changes in the average water temperature throughout the year are as follows: 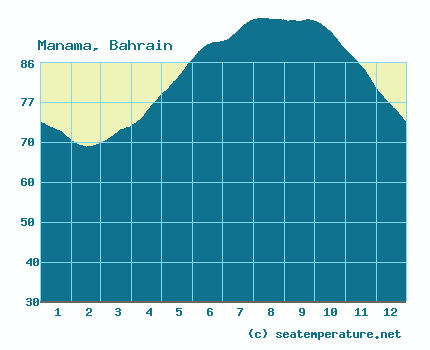 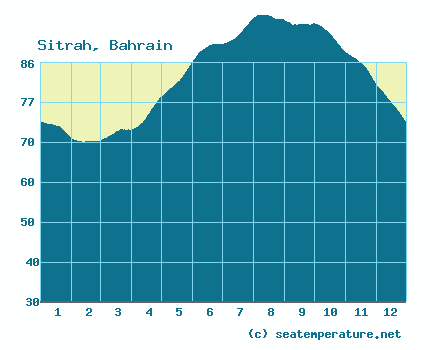 We process, analyze and store data for every beach and city in Bahrain. Below is a table with current weather data and trends in some places of the country.

Bahrain is located in the Middle East. The country is washed by the Persian Gulf. Bahrain is a small country. To determine the temperature of the water in it, we track only five settlements.

The climate of the country is transitional from tropical to subtropical, marine. The average temperature in winter is around +17 o C, in summer + 33-37 o C, while during the day the temperature can rise to +26 C in winter and + 42-45 C in summer. Due to the strong advection in clear skies, nights can be cool at any time of the year (in the summer - + 19-24 oC, in winter up to +6 C). Precipitation is up to 90 mm per year, usually between December and April. But the humidity is very high (up to 100% for about 8 months a year, the rest of the time - 67-95%), which makes the heat much more difficult to tolerate. A visit to Bahrain is best planned for the winter, or early spring. This is the most pleasant season in the context of the weather. Staying in the country in the summer can be very difficult due to the grueling heat, coupled with high humidity.