Water temperature on the beaches of Azerbaijan

Most popular locations in Azerbaijan over the past week

Conditions of sea water on beaches in Azerbaijan

Now at the beaches in Azerbaijan, the water temperature is in the discomfort zone. Swimming in such water will not give you much pleasure.

The water temperature in Azerbaijan tends to decrease, its value has decreased both over the last 10 days and over the month.

Today the warmest water in Azerbaijan is recorded in Astara. Its value in this location is 60°F. And the coldest one is in Guneshli, its value 54°F.

For the two most popular locations for swimming in Azerbaijan, the graphs of changes in the average water temperature throughout the year are as follows: 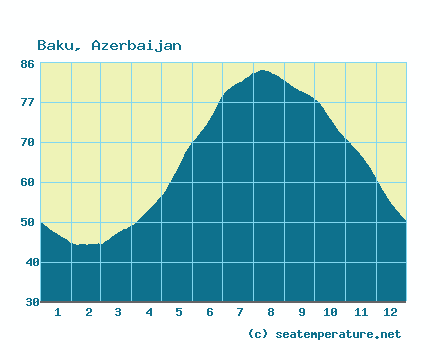 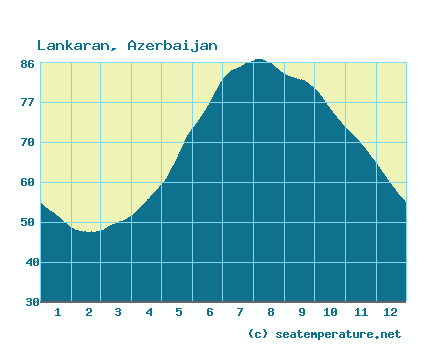 We process, analyze and store data for every beach and city in Azerbaijan. Below is a table with current weather data and trends in some places of the country.

Azerbaijan is located in Asia. The country is washed by the Caspian Sea. Azerbaijan is a small country. To determine the temperature of water in it, we track only ten settlements or resorts.

Transitional from moderate to subtropical. Due to the strong influence of altitudinal zonation, the territory of the country is quite heterogeneous in weather conditions (there are 9 climatic zones in total). The average July temperature ranges from +5 C in the highlands to +27 C in the low, January, respectively, from -10 C and +3 o C. The maximum summer temperature can reach +45 C (Julfa), in winter the thermometer in mountainous areas it can fall at night to -40 o C. Precipitation falls from 200 mm. per year on the slopes of the foothills of the Greater Caucasus, up to 1200-1700 mm. on the Lankaran lowland. Strong north winds are characteristic, mainly in the fall.