Water temperature on the beaches of Australia

Most popular locations in Australia over the past week

Conditions of sea water on beaches in Australia

Now in the beaches in Australia, the water temperature has different values. There are very cold locations, there are cool places, and there are beaches with warm and comfortable water.

The water temperature in Australia has increased both over the past 10 days and over a month.

Today the warmest water in Australia is recorded in Parap. Its value in this location is 88°F. And the coldest one is in Howrah, its value 56°F.

For the two most popular locations for swimming in Australia, the graphs of changes in the average water temperature throughout the year are as follows: 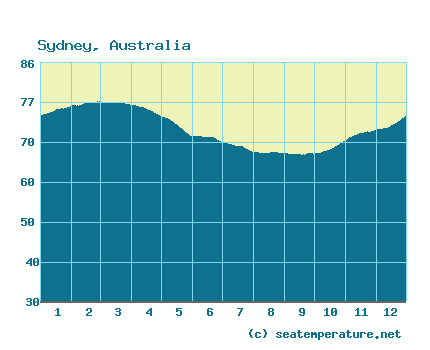 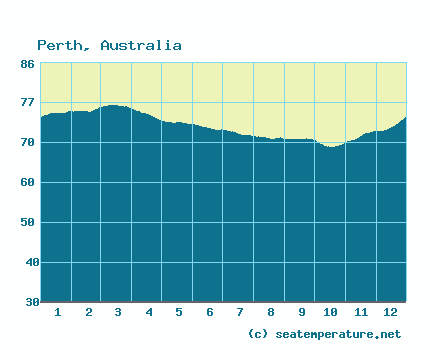 We process, analyze and store data for every beach and city in Australia. Below is a table with current weather data and trends in some places of the country.

Australia is in Australia and Oceania. The country is washed by four seas, such as the Indian Ocean, Arafura Sea, Coral Sea, Tasman Sea. Australia is a large resort country and has a long coastline. To determine the temperature of the water in it, we track 230 settlements and resorts.

Due to its huge size and unique geographical position, the country has a wide variety of climatic conditions - from subequatorial regions in the north to temperate marine in the south. Hot and humid northern parts of the country are replaced by semi-desert tropical central regions, and the southern and southeastern coasts belong to the subtropic zone, with a rather pleasant warm climate. Tasmania is the “coldest» region of the country with a temperate climate, but there are also enough sites that are excellently suitable for recreation. Therefore, you should carefully consider the choice of a place of rest, taking into account the climatic characteristics of the country. The hottest time of the year is from November to January, at which time throughout the country the temperature is from +20 C to +32 oC, and in the central regions it can reach up to + 38-42 o C. Moreover, already within 1.5 - 2 hours after sunset, the temperature can drop by 10-12 o C. On the Pacific coast and the islands of the Great Barrier Reef the weather at this time is milder. It is relatively cold in June - August, the temperature rises no higher than + 15-18 o C, and in the temperate zone it sometimes drops to 0 o C. In winter, rains are frequent. From May to August - the perfect time to travel, September - December - the peak season.